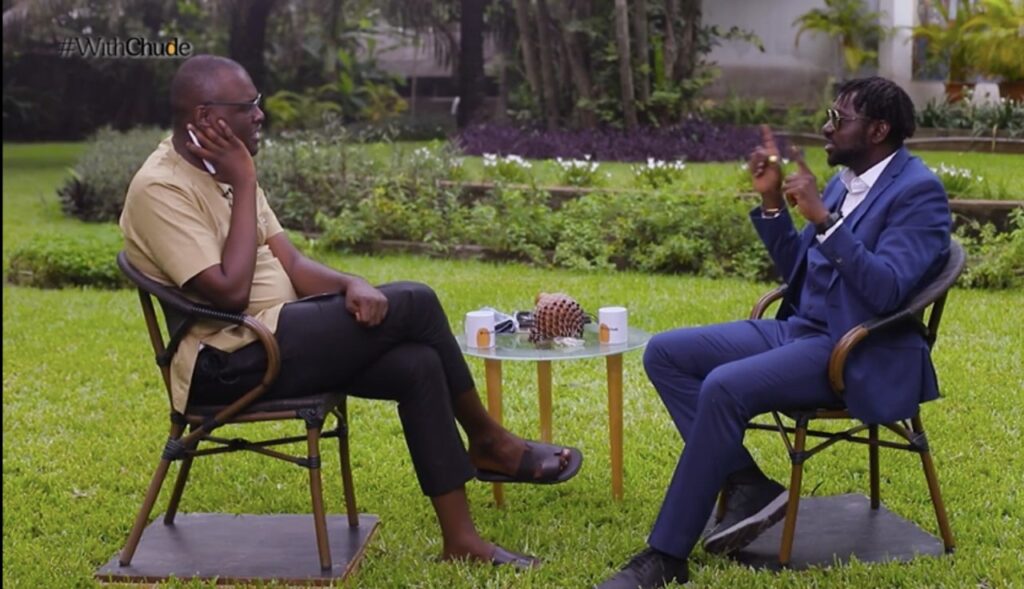 Inspiring a major part of the history and evolution of the Nigerian sound, Ahmedu Augustine Obiabo is not a name you hear often. On this week’s episode of #WithChude, Augustine, popularly known as Blackface Naija, discussed how he has managed a struggling career despite writing chart-topping songs and receiving negative criticisms from the media after a song launch with host and co-founder of Joy Inc. Chude Jideonwo.

Starting out his career when Nigerian music was not widely accepted, Blackface Naija became a well-known name when he wrote the Nigerian classic, African Queen. Although this song garnered the love and attention of people all over the world, Blackface Naija did not get the credit due to him. This didn’t seem to move him as he stated that though he was sad he never got acknowledged for the stellar work he did with the song, he was excited about the acceptance that it got.

For him, making music was not about amassing wealth; it was about making sounds people love and connect with. In his words, “I came into music to make music for the fans. I did not come into music because I wanted to get rich. No Nigerian music industry or any Award has given me one Award from all the music I’ve made because I am the one they don’t want to rate. I am the one they don’t want to talk about. But as long as the people embrace the music then, who cares?”

Delving deeper into the trajectory of his career over the years, he said, in terms of how people quantify success, “I haven’t been successful in the music industry, the work I’ve put in pays me and lets me have a big house and a big place- but I don’t have that. What I really have is the respect of the people on the street. The people who say thank you for the music.”

Explaining why he feels his career has gone the way it has, Blackface said that it is because he does music differently from how it is usually done. Despite the mixed reaction that surrounds his music, Blackface continues to make enthralling music that has continued to remain relevant today.

See link to the video below:

#WithChude is a special series of targeted multimedia conversations and investigations focused on narratives that enable and strengthen the mind, heart, and spirit.

All past and new episodes of #WithChude premiere on Saturdays at 7 am on watch.withchude.com. You can also watch the show every Saturday on Channels TV at 1 pm, with reruns every Sunday on Wazobia TV Channel 98 at 5 pm, every Tuesday on Rave Tv at 5 pm, every Wednesday on Pop Central Station DSTV Channel 189 at 8 pm, and every Thursday on EbonyLife TV StarTimes Channel 189/191 at 7:30 pm.

An extended play podcast is up on listen.withchude.com, as well as on Apple Premium.

Everyone can join the conversation.

For Chinedu Okafor, its all about making an impact with words,  creating a profound impression on the audience with the intended narrative.