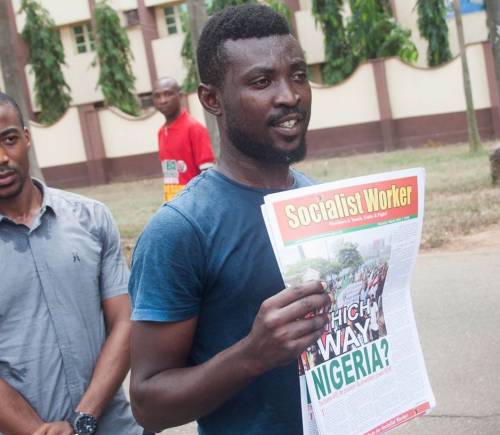 As the Keke Marwa reached Ile-Iwe junction, I counted 21 police vans and an armoured tank sorrounded by gun-fllashing officers restless and harrasing passersby. No regrets whatsoever. Nothing apologetic.

“They murdered one of us and still keep beating us up, which kind thing be this?” Before one could query more, three fiery officers, cursing and spitting, pounced on one of the riders beating him down with kondos and bats. The young man struggled with them, shouting with blood spilling out his mouth and forehead; ” you guys will kill us all today!”

Moving to the other side of the road, I was able to ask many others who still dare to stay and I gathered that a police officer murdered a rider with dagger all because he refused to pay a #100 bribe.

Tunde Eleyele is a husband who hustles by riding a tricycle that belongs to his friend and boss, Lekan. He had paid all his dues to the ticketers of the National Union of Road Transport Employees (NURTW) and happily continued to ride on as he still has a two-week deficit to pay to his boss. But as soon as he is stopped by a police officer asking for a #100 bribe, he confidently asked that he pays later after two or more trips. But the officer in response angrily pulled a dagger off his pocket and like-play-like-play hit Tunde Eleyele by the left chest and draws the sharp metal downwards!

All around Command Bus stop were shocked and started mobbing the officer until he escaped through the interventions of some soldiers around. Then the mass started a protest. The Lagos State Task Force moved in, and started harrasing the protesters and beating passersby rubbing much more insults on the deadly injuries. For five hours, this madness of an injustice continued till about 3pm when some of the riders managed to converge at Command, away from the Ile-Iwe junction where the Meiran Police station is. But within tens of minutes, the Task Force moved down and started shooting at the crowd, killing a teenager Vulcanizer while three others get hospitalised as a result of bullet wounds. The soldiers at Command who saved the murderer police officer initially had to rise back in hostility to the Task Force.

This incident is one out of plenty as just last week, soldiers in Ijebu were filmed shooting live ammunition straight at protesting students of Tai Solarin University of Education (TASUED). After the #EndSARS movement, many now feel the rulers have learnt nothing. This is the crux of this piece. Our rulers are actually doing what their ideas teach them. They are trying to use the famous Fascist formula of deepening the “blood and mud” so as to rule harder and weaken the masses’ resolves.

That police and military brutalities are now worse after the Great #EndSARS movement is employing the logic of the wicked by spilling more blood so others can get softened. Buhari is trying to weaken resistance by doubling the attacks. This is why the government even murders protesters in the North, inspite of the massive insecurity.

Youths, activists, and the Left in Nigeria must understand that the #EndSARS movement has shown to the ruling class the very possibility of a revolution after the Workers’ movement has been balkanized. The retrogression of the Labour movement through the weakening of both the bureaucracy and the trajectory of the Old Left is audacious on how consciously the rulers work hard to destroy prospects of radical change. There is a need to keep intensifying political actions and advancing strategies through constant and relentless organising.

The #EndSARS memorials were quite successful, but it’s inability to retain the massive surge is reflecting the level of political work for the past one year. The pains seems overshadowing the gains if the renewed violence of these ruling class is anything to go by. But the expected hard counterattacks usually show a great play of pressures on the same oppressors. They are very quite jittery. This is why they are afraid of any protest or critical gathering.

As we want #JusticeForTundeEleyele and the slain Vulcanizer, we must make sure we get more plenty and adopt radical ways of organising. Police and soldiers are protecting those who are destroying our futures. They will stab and be more violent, just like their Ogas at the top. So, we too must upgrade our organisation. We must stop our relationships with ideas and parties of the oppressors like PDP and APC. Any support for these parties and their ideas are same for Buhari, Atiku and others who are destroying our futures.

Summing up would also mean that parties, groups and ideas of the people must also start getting bolder and more open. The African Action Congress (AAC) and other formations must endure to leap farther now, gapping off internal and external distractions while also beefing up more stout and pointal on legal and political fronts. AAC also needs to win other parties of the oppressed over in a gigantic unity. The advantage of the Coalition for Revolution (CORE) heralding a new national and global networking must in its fullest, be harnessed.