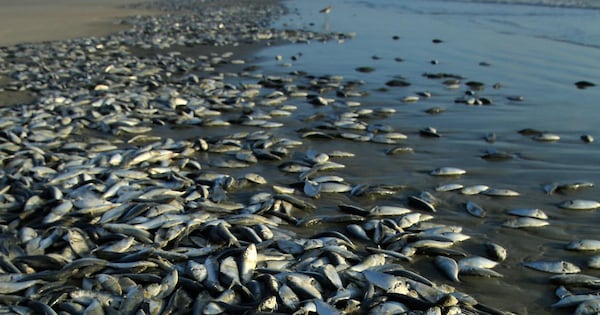 
Ghanaian officials have sought to give explanation for the cause of deaths of fishes and some dolphins washed ashore during the Easter festivities in some coastal communities.

More than 60 dead dolphins and tonnes of different species of fish were washed ashore along the coasts.

In Axim-Bewire in the Western Region, over 60 dolphins were also washed ashore on Sunday, April 4, 2021.

Prior to that discovery, tonnes of large species of fish have also been spotted in Osu in the capital Accra and Keta in the Volta Region.

In an earlier statement the government’s fisheries ministry said “Initial observation of the fishes showed no wound /lesions on their bodies.

It is to be noted that after two to three days of death of an animal pathological signs change. Samples of the fish were collected on ice to be examined critically in the laboratory.”

Although the country’s scientists say they are still probing the rare occurrence, the Fisheries and Aquaculture Minister, Mavis Hawa Koomson revealed that fish stress was the cause of the mass fish deaths.

The Fisheries minister, said in a post on Facebook that “preliminary investigations conducted so far has revealed that the fish kills occurred as a result of stress factor on the side of the fishes.”