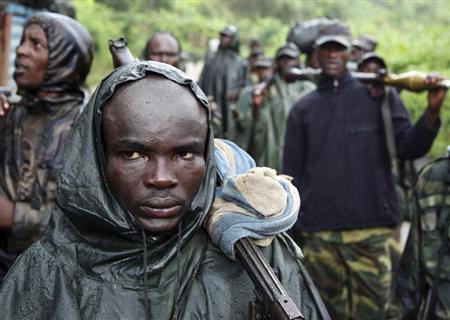 (Reuters) – Democratic Republic of Congo’s resource-rich east is again on the brink of a major conflict, a senior U.N. official warned on Friday as he urged the U.N. Security Council to urgently approve plans for a peace enforcement unit to combat armed rebel groups.

Roger Meece, head of the U.N. mission in Congo known as MONUSCO, told the Security Council that the creation of a peace enforcement unit within the peacekeeping force – which would be a new move for the United Nations – was “an urgently needed and important response to the existing situation on the ground.”

Peace enforcement missions allow the use of lethal force in serious combat situations, while peacekeeping operations are intended to support and monitor an already existing ceasefire, diplomats and U.N. officials say.

The Congolese government has reached an uneasy truce in eastern Congo with M23 rebels and Uganda is now hosting peace talks, but Meece warned of “increased fears and rumors in the area of an imminent resumption of large-scale military actions.”

“The overall situation is volatile and precarious, and could break down at any time into large-scale conflict without much, if any, prior warning,” Meece said. “Our forces and resources are stretched very thin over a broad area.”

“The M23 forces maintain an appearance of being well supplied, well provisioned, and well armed,” said Meece, adding that the rebels continued to recruit “new combatants, including through the use of force and widespread recruitment of minors.”

M23 began taking parts of eastern Congo early last year, accusing the government of failing to honor a 2009 peace deal. That deal ended a previous rebellion and led to the rebels’ integration into the army. They have since deserted the army.

The U.N. Security Council’s Group of Experts, which monitors compliance with sanctions and an arms embargo on Congo, said in a report last year that Rwanda’s defense minister was commanding the M23 revolt and Rwanda was arming the rebels and sending troops. Rwanda has strongly denied involvement.

A delayed U.N.-mediated regional peace deal aimed at ending two decades of conflict in eastern of Congo is due to be signed in the Ethiopian capital Addis Ababa on Sunday.

U.N. Secretary-General Ban Ki-moon also said in a report on MONUSCO on Tuesday that the command, equipment quality and fighting ability of M23 rebels when they captured Congo’s frontier city of Goma in November suggested that they had external support, but he did not say where from.

The M23 rebels took Goma in North Kivu province on November 20, but withdrew from the city 11 days later.

“While there has been a general pause in M23 offensive operations since their temporary occupation of the provincial capital of Goma late last year, the M23 has continued to consolidate their own administration structures in the portion of North Kivu they occupy,” Meece said.

Congo’s U.N. Ambassador Basile Ikouebe also urged the Security Council to quickly approve the deployment of a peace enforcement unit for MONUSCO. Ban is due to officially recommend to the 15-member council next week that such a force be created and diplomats have said the move will likely be supported.

“The time is right for this,” Ikouebe told the council.

U.N. peacekeeping chief Herve Ladsous said on Tuesday the United Nations had no choice but to create a peace enforcement brigade of a “robust nature” to take on the armed groups.

“The brigade would be tasked … with first preventing the expansion of those armed groups that sprout like toxic mushrooms after the rain all over the place, there’s at least 20 of them,” Ladsous told the International Peace Institute.