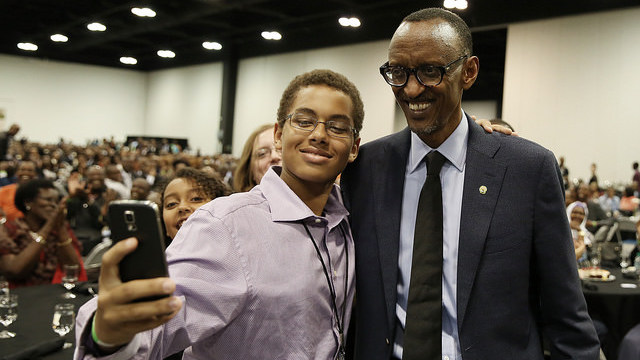 Kagame posing for a photo with a young person

As Europe continues to be a hostile ground for President Kagame,he  has decided to crisscross the United States of America almost every moth preaching the gospel of lies concerning what he calls the economic success, reconciliation and shamelessly democracy .Together with his wife, the Kagame’s have been giving lectures to their admirers in some parts of United States were some people have little or no knowledge  on the atrocities against humanity  of the remaining Pinochet(Kagame) on the African Continent.

Mrs Jeannette Kagame in her usual style of catching the attention of foreigners who really don’t know how this mother of Four Children has killed parents of some Rwandan children leaving them orphans and women widows, she said that Rwanda’s journey to resilience, 20 years after the genocide, had been driven by great sacrifice, hard work, a real longing for change and transformational leadership. But who has travelled this journey? How long has been the journey? Where are the men and women they travelled together? Always the Kagame’s have been praising themselves as the only people who have travelled what they call Rwandan journey. Where are those they travelled together from Murindi, Urugano to the Rwandan Capital? Very few in fact could be traced in both political and economic journey. The list is long but I will endeavor to list some of the comrades who travelled with president Kagame but are either physically extinct or politically impotent.

The former RPF founder and  Rwandan Hero Gen. Fred Rwigema, despite his selfless contribution and sacrificing his own life for the Kagame’s to travel the journey  and enjoy the proceeds of the journey, Gen. Fred’s Family life has become  hopeless under the Kagame and RPF regime a party that Gen Fred founded and  cherished.  This list also includes those who have been killed, incarcerated or politically impotent. Col. Adam Wasswa, Bitamazire, William Bagire, Vedasite Kayitare(Intare Batinya) Chris Bunyenyezi, Peter Bayingana, Stephen Ndugute Kalisoso, Col. Lizinde, Col. Alex Kanyarengwe, President Pastaur Bizimungu,Seth Sendashonga, Col. Patrick Karegeya, Major. Alex Ruzindana, Col. Fred. Nyamurangwa, Cpt. Frank Tega.  Gen. Kayumba Nyamwasa, Dr. Theogene Rudasingwa, Gen. Frank Rusagara, Col. Rose Kabuye, Aloysia Inyumba.Just to mention a few. There was another group who travelled with Kagame in financial contribution and if they were not there, the war would have been difficult, this list includes, Tycoon Tilbert Rugiro whose property has been seized by Kagame, his now in back in exile.

Silas Majyambere , although his not physically hunted ideologically he is , he has not returned to Rwanda for reasons of the Kagame dictatorship. Valence Kajeguhakwa he recently returned from exile where he has been for a longtime , again he has been made politically impotent and he has decided to keep quiet so he can get back his property as promised by the regime. The First Lady deceptively said that after the Genocide, choices had to be made to rebuild the country, some of which required maximum commitment.

“Yes, we had options – we could have decided to go the natural path in which case, we surely would have self-destructed with rage. On the contrary they have even moved an extra mile in what she calls the natural path, do these young American Children know the number of the families your husband has killed? Did they see the recent dead bodies wrapped in plastics bags floating in Lake Rweru? Did the First Lady honestly tell those children that some of the bodies in the Akagera River the world witnessed during genocide where people your husband killed tied hands back (Kandoya)? Did you tell those children that all the widows and orphans of all the fallen comrades of your husband who travelled the long journey go without food and don’t have school fees? Do you know that these groups of the relatives of the fallen comrades are not employed? They cannot get a tender in a regime owned by your husband because he owns a chain of Business Empire?  Did you tell your audience that your husband came in his own private jet he rents the state to make those journeys that cost the Rwandan taxpayer dearly?

She further said that the chosen path shows the true resilience of the Rwandan people.

“We are often reminded that dignity is a right for all Rwandans, just like it is for every other person in the world. With great sacrifice, hard work, a real longing for change, and a transformational leadership, we managed to reclaim our dignity,” she added. What dignity did you reclaim Madam First lady? Rwanda is the most repressive country in the world coming second to North Korea, you have killed, incarcerated or intimidated whoever, disagrees with your doctrine and bankrupt political ideology.

The Rwandan first lady mentioned the role of women in RPF regime “For example, recently Rwandan women held a fundraising in honor of the brave men and women in uniform who liberated our country. The proceeds of this fundraiser will go towards caring for those members of our armed forces, who were seriously injured during the liberation struggle. From a very low base, and everything being a priority, we uplifted,” Again this a naked lie, in fact all the money collected by the First lady in Imbuto Foundation  is a top up of the business empire of  their regime or is used to hunt those they disagree politically. The Imbuto Foundation money goes to the indoctrination of the .youth in the RPF bankruprt policies   like “Ndumunyarwanda. We need a vibrant society that has a choice of politics, Kagame and his wife don’t have a monopoly of wisdom as such they should remember that the journey they are talking about could be travelled better if they allow different ideas, unfortunately we are reversing the gear of the political track creating the same reasons that made RPF take arms in 1990.