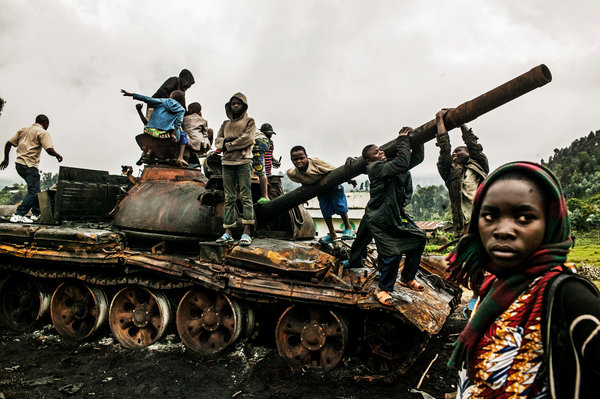 Following a string of recent victories on the battlefield by the Congolese Army operating with United Nations support, the group, known as the M23, said that it was ending the 20-month rebellion that had brought renewed instability, uncertainty and conflict to the eastern part of Congo.

In a statement, the group’s chairman, Bertrand Bisimwa, said that the M23 had decided “from this day to put an end to its rebellion and to pursue by purely political means the search for solutions to the root causes which led to its creation.”

He added, “Commanders are requested to prepare the troops for the process of disarmament, demobilization and social reintegration whose terms are to be agreed with the Congolese government.”

The move was greeted as a victory for the Congolese military after years of frustration but one that analysts said would prove fleeting unless the government addressed the root causes that have led groups to take up arms in the first place.

“In a region that has suffered so much, this is obviously a significant positive step in the right direction,” said Russ Feingold, the United States special envoy to Congo and the Great Lakes region, at a briefing in Pretoria, Reuters reported.

Analysts have cited diplomatic pressure on the Rwandan government as a major factor in the group’s defeat. United Nations investigators have alleged that Rwanda supported the rebels, a charge denied by the government here in Kigali. The United States announced that it was suspending military aid to Rwanda.

“The international pressure on Rwanda seems to have made a difference,” said Ida Sawyer, senior researcher with Human Rights Watch. “They will hopefully think twice before backing yet another abusive rebellion.”

The question is whether the Congolese military, supported by United Nations peacekeepers, can take on the dozen or more other armed groups in the area, restoring order throughout the region, or whether the political will is going to dissipate and the military campaign will lose focus following the defeat of the M23.

The announcement comes barely a year after the group occupied the provincial capital of Goma, a city of roughly 1 million people and a major commercial center in the eastern part of the country. The occupation of Goma was the M23’s high water mark as a force in the area, but the seizure of the city may have sown the seeds of its undoing.

The loss of a major city was an enormous embarrassment both to the Congolese government and the United Nations, which had a significant number of peacekeeping troops in the city. The Congolese military responded by reorganizing its forces in the region, removing officers viewed as ineffective and raising morale with better equipment and more consistent pay. The United Nations authorized a new intervention brigade of 3,000 troops with an aggressive new mandate.

Congo has been the scene of one of the most intractable and deadly conflicts the world has seen, claiming millions of lives in the past two decades. A string of militias, foreign armies and rebel groups have rampaged across its territory, pillaging the countryside of valuable minerals while raping and murdering the population.

Human rights groups say that the ill-disciplined Congolese Army also took part in the violence and in many instances perpetrators still needed to be held accountable. But greater restraint on the part of the military has been in evidence, an encouraging trend.

The M23 movement and the Congolese government appeared to be close to an agreement last month but peace talks in the Ugandan capital, Kampala, broke down. A few days later, combat began again a few miles north of Goma, with both sides claiming that the other had instigated the fighting. The Congolese military inflicted a string of defeats on the M23, forcing the group to retreat from its strongholds.

The government in Kinshasa ignored calls from the M23 for a new truce and a return to the negotiating table, opting instead to continue attacks on the rebels, who had retreated to the hills around the Ugandan and Rwandan borders until Tuesday’s surrender.

Ms. Sawyer called the end of the rebellion a “significant development” for the people of the region and in particular those who lived under M23 occupation. “Yet huge challenges remain,” she said, “including to address the threats posed by numerous other armed groups in eastern Congo who have also committed horrific attacks on civilians, and to bring to justice those responsible for serious human rights abuses.”