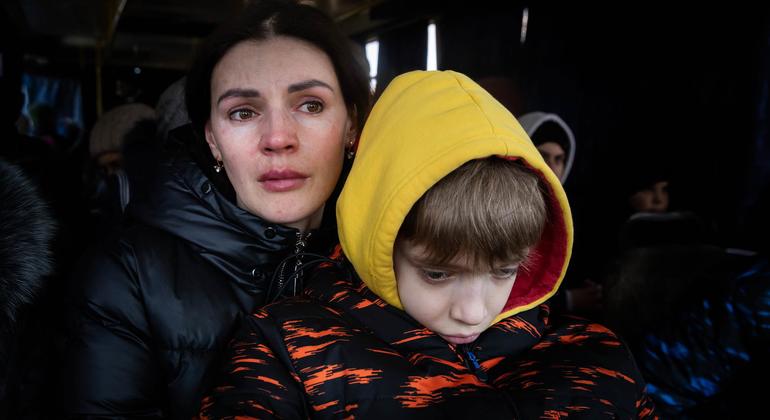 Nearly four months since the Russian invasion, Michelle Bachelet used her final keynote address to the Geneva forum, to urge Member States not to give up on the post-COVID-19 plan “to recover better”, and not repeat the kind of devastating global financial meltdown which took place in 2008.

Failure to stick to what was agreed during the dark days of the pandemic – to ignore its lessons, and above all, to not put people first in this global recovery – threaten to leave people and economies even less able to resist new shocks than they are now, the UN rights chief insisted.

“We gathered in multilateral fora, in high level debates and donor meetings and spoke of global solutions and of putting people at the centre of our efforts”, she said.

“We committed ourselves to learning the lessons of the pandemic, and to recover better. Eager to avoid the devastating consequences of the austerity that followed the 2008 financial crisis, the international community agreed to change course: building – together – transformative societies and towards greener economies that will be more resilient to crises. We are now facing a vital test of that commitment. And we need to meet it.”

In response to her announcement that she would not be seeking a second term as High Commissioner, the UN Secretary-General, António Guterres, issued a statement, praising her “relentless service” in the top rights job.

“From her earliest days in Chile, with enormous personal sacrifice, she has been on the frontlines of the human rights struggle all her life“, said the UN chief.

“In all she has done, Michelle Bachelet lives and breathes human rights. She has moved the needle in an extremely challenging political context – and she has made a profound difference for people around the globe. She continues to have my full support. I will always value her wisdom, strong voice and success in ensuring that human rights underpin the actions of the United Nations.”

At the beginning of the Council’s marathon four-week summer session – a week longer than usual to cope with an ever-growing workload – Ms. Bachelet highlighted the need for all countries to respect the climate commitments they’d made in 2015 in Paris, and also the 2030 Sustainable Development Goals (SDG) Agenda – whose financing gap has now widened to some $4.3 trillion per year.

“Without a significant boost in financial resources, we will not be able to achieve the SDGs,” the High Commissioner explained, adding that far greater international cooperation and solidarity for developing nations was key, particularly with regard to the galloping debt relief payments that they face.

“The role of international financial institutions is critical in supporting indebted countries,” she said, noting that international human rights law “provides the framework for this support…ensuring that measures adopted do not result in discriminatory outcomes, in particular for the most marginalized”.

In keeping with tradition, the High Commissioner’s opening address covered many country situations of concern, from Chile to Honduras – where her Office has provided support to tackle femicide – to Haiti, in response to growing gang violence in the capital, Port-au-Prince.

Ms. Bachelet also updated the Council on her recent official visit to China, and on her Office’s as-yet unpublished report into the situation of Uyghur and other predominantly Muslim minorities in Xinjiang “including broad arbitrary detention and patterns of abuse” in detention.

The report “is being updated” on the human rights situation in Xinjiang, Ms. Bachelet explained, telling journalists later on the sidelines of the Council that she expected it to be released before her mandate ended.

Turkiye, the UK, Guatemala and Singapore were among several other countries to be called out by the UN rights chief for ongoing rule-of-law concerns, while “unconstitutional changes of power” in Burkina Faso, Chad, Guinea and Mali also elicited encouragement from Ms. Bachelet to the de-facto authorities to “yield power to civilian-led Governments with democratic legitimacy”.

Any such transition should be “inclusive” and address the “wider grievances of the populations and build democratic societies grounded in accountability and rule of law”, the High Commissioner insisted.

The Human Rights and Alliance of Civilizations Room in Geneva, Switzerland.

Some 18 months since bloody conflict broke out in northern Ethiopia, reports indicate rights violations and abuses in the Benishangul-Gumuz and Oromia regions “including attacks against civilians, arbitrary detentions and destruction of properties”, Ms. Bachelet noted.

In the US, recent moves by some states to consider restricting abortion “pose a threat to human rights, with disproportionate impact on women with limited resources”, she continued, before welcoming the recent decision of the Colombian Constitutional Court to decriminalize abortion in line with positive developments globally, including in Argentina and Mexico.

After calling on Brazil to ensure that upcoming general elections in October take place with respect for fundamental rights, amid attacks against candidates, “particularly those of African descent, women and LGBTI+ people”, the High Commissioner noted with regret Russia’s “arbitrary arrest of a large number of anti-war protesters”, along with “general prohibitions” on freedom of expression, using “vague and ambiguous notions including ‘false news’.

Created in 2006 to address human rights situations of concern all over the world and to promote the fulfilment of everyone’s basic freedoms, the Council has now met 50 times in regular session.

Assiduous observers of the forum may be interested to know that it has chalked up 2,007 formal meetings, including 34 Special Sessions, seven Urgent Debates and 932 Interactive Dialogues, and 232 Panel Discussion.

In addition, the Council has created eight Country Special Procedures and 35 Investigative Mechanisms, explained Federico Villegas, the President of the body for 2022, who added that since that first session, civil society participation has increased by more than 150 per cent.

Marking this 50th session, a commemorative event has been planned featuring the participation of several keynote speakers including Estela Carlotto, President of the Association of Grandmothers of the Plaza de Mayo – a human rights organization that has been searching for children who have been kidnapped and disappeared during the dictatorship years in Argentina.

Planned for the opening day of the session, the Commission of Inquiry on the Occupied Palestinian Territory, including East Jerusalem, and in Israel, will make its first appearance before the Council since its creation a year ago.

On Thursday 16 June, Ms. Bachelet will be back to present an oral update on the situation in the Ukrainian city of Mariupol.

The situation in Myanmar will be addressed twice during this first week of the session, with an oral update by the High Commissioner on Tuesday 14 June, followed the day after by a panel discussion on human rights violations against Rohingya and other minorities.

During this first week, the Council will also hear on the situations in Eritrea, Sudan, Afghanistan, Nicaragua and Iran.

The Council will also address thematic issues during this first week of the session with interactive dialogues with independent experts on sexual orientation and gender identity, the right of peaceful assembly, the rights of people living with leprosy, and on discrimination against women.