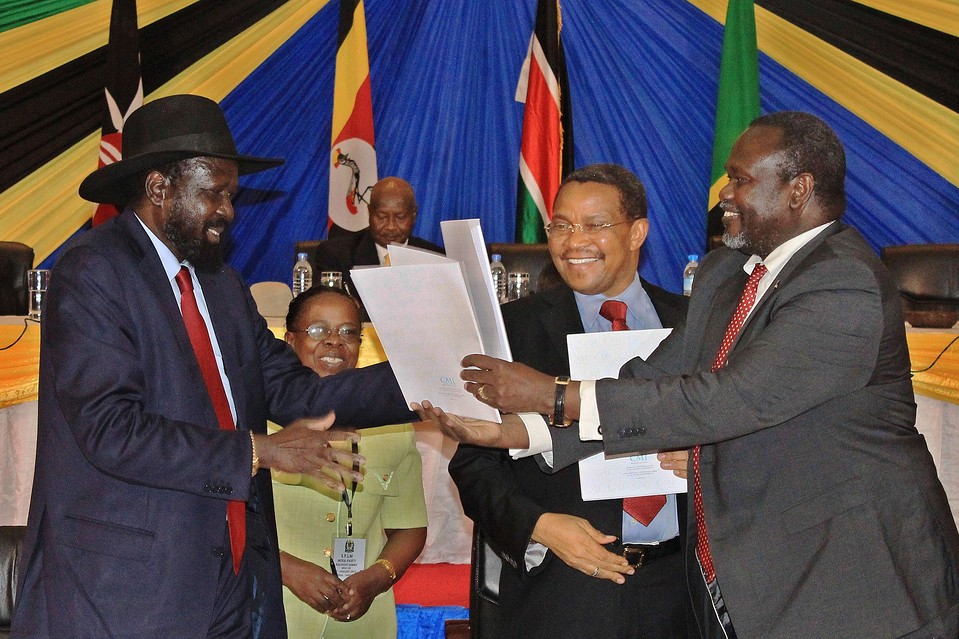 KAMPALA Uganda—Warring factions in South Sudan have signed an agreement to reconcile the ruling Sudan People’s Liberation Movement party, officials said on Thursday, in the latest effort to resolve the conflict that has ravaged the oil-rich nation for more than a year.

Under the deal, signed in the northern Tanzanian city of Arusha, the parties agreed to “reunify and reconcile” the three factions within the party, the Finland-based conflict-resolution group Crisis Management Initiative said in a statement.

President Salva Kiir, signed the deal with his former deputy Riek Machar —now a rebel leader—and Deng Alor Kuol, the representative of former political detainees who were arrested shortly after the outbreak of the violence in December 2013.

The deal outlines the road map toward the re-unification of the party, including political, organizational and leadership issues, Crisis Management Initiative, which has been supporting the talks, said.

Two previous cease-fire deals broke down almost immediately and doubts remain over whether the latest will hold.

“Healing the rift within the ruling SPLM is a necessary step forward, but alone it will not be sufficient for peace” said Akshaya Kumar, a South Sudan researcher with the U.S.-based campaign group, Enough Project. “This latest recommitment to cease hostilities has no enforcement mechanism”

The violence, which erupted after a long-running internal power struggle within SPLM has since splintered the country along ethnic lines, pitting Mr. Kiir’s Dinka tribesman against Mr. Machar’s Nuer community. More than 10,000 people have been killed and two million others uprooted from their homes.

The deal comes after weeks of talks mediated by Tanzania President Jakaya Kikwete. The Tanzanian talks were called to complement the sluggish peace negotiations that have been continuing for nearly a year in Ethiopia, under the auspices of the regional Inter Governmental Authority for Development, according to diplomats.

Until the outbreak of the fighting, South Sudan’s oil fields were a vital source of crude for Chinese refiners. But output has since dropped by a third to 160,000 barrels-a-day,leaving the country struggling for foreign revenues to finance food and other vital imports.

Aid officials called for more commitment to the peace process.

“This is only an important first step in the search for broader peace. Arusha must now lead to a new momentum, and renewed commitment by all sides to immediately stop the fighting,” Zlatko Gegic, Oxfam’s South Sudan director, said.