KPFA Evening News Anchor David Rosenberg: Rwandan opposition leader Bernard Ntaganda is reported to be in perilous condition after going on a hunger strike to protest inhumane conditions in Rwanda’s Mpanga Prison, which is also known as Rwanda’s Guantanamo. Rwanda has been a close ally and military partner of the U.S. since President Kagame and his Rwandan Patriotic Front seized power in 1994. KPFA’s Ann Garrison has more. 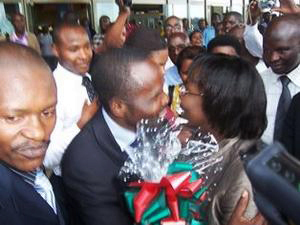 On Jan. 17, 2010, Bernard Ntaganda greeted fellow opposition leader Victoire Ingabire with flowers at the airport in Rwanda’s capital, Kigali, upon her return from exile. As candidates of their individual parties, they planned to run as allies against President Paul Kagame but were sent to prison instead, where they remain.

KPFA/Ann Garrison: In January 2010, Rwandan opposition leader Bernard Ntaganda, greeted opposition leader Victoire Ingabire at the airport with flowers in Rwanda’s capital, Kigali, upon her return from exile. Ntaganda and Ingabire head two different parties, but they formed an alliance as both attempted to run as their party’s candidate against sitting President Paul Kagame that year.

Instead, Bernard Ntaganda was in prison by mid-June, Victoire Ingabire by mid-October, and both have remained in prison since. Rwandan refugees in Europe carry banners of their images when marching on their home country’s embassies in Brussels and other European capitals.

Ntaganda’s fellow party members report that he went on the hunger strike to protest inhumane conditions that include being constantly bound and shackled in his cell.

In October 2012, Amnesty International published a report titled, “Rwanda: Shrouded in secrecy: Illegal detention and torture by military intelligence,” in which they sounded an alarm about rising rates of illegal detention, disappearances and torture in Rwandan prisons, including electric shock, beatings, near suffocation and sensory deprivation. 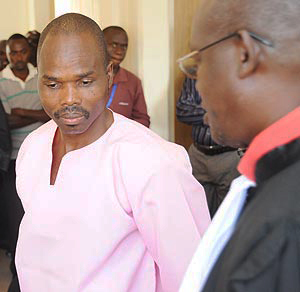 Nevertheless, former British Prime Minister Tony Blair, evangelical megachurch pastor Rick Warren and former President Bill Clinton are still some of Rwandan President Paul Kagame’s most enthusiastic supporters. Clinton recently said that he makes more allowances for this regime’s human rights abuse, both in Rwanda and in the neighboring Democratic Republic of the Congo, because the country has made so much progress.

Before he was arrested and imprisoned, however, Bernard Ntaganda told KPFA that Rwanda’s so-called progress has concentrated wealth in the hands of Kagame’s Rwandan Patriotic Front Party allies and radically increased wealth disparity, leaving most Rwandans very poor.

KPFA/Ann Garrison: Rwandan journalist Didas Gasana said he would like to tell American taxpayers that their taxes are supporting one of the most brutal dictatorships in Africa and that it’s a betrayal of the Rwandese people. 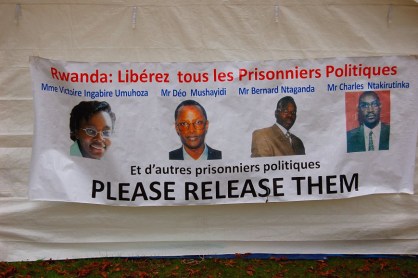 Rwandan exiles and their supporters in Europe hold frequent demonstrations. This banner calls for the release of Rwandan political prisoners, including Victoire Ingabire Umuhoza and Bernard Ntaganda. Charles Ntakirutinka, far right, former minister in the government of former President Pasteur Bizimungu, has since been released after completing a 10-year prison sentence.

Didas Gasana: I would like Americans to know that the tax they are paying is used to sustain and support one of the worst dictatorships I have seen in Africa. I would like them to ask the Congress, ask President Obama why their taxes are sustaining the Rwandan dictatorship in the form of aid. What America is doing, it’s a betrayal of the Rwandese.

Ann Garrison: Gasana fled Kigali, Rwanda, to Kampala, Uganda, in 2010, the same year that Bernard Ntaganda and Victoire Ingabire went to prison instead of running for president as planned. He was granted refugee status in Europe after a fellow refugee journalist was gunned down in Kampala. The Rwandan government then sent him a letter in Europe to let him know that he’d been sentenced to 37 years in prison, in absentia.

Rwanda has one of the highest rates of incarceration in the world, with statistical studies varying between the third and sixth greatest number of prisoners per capita.

Oakland writer Ann Garrison writes for the San Francisco Bay View, Global Research, Colored Opinions, Black Star News and her own website, Ann Garrison, and produces for AfrobeatRadio on WBAI-NYC, KPFA Evening News and her own YouTube Channel, AnnieGetYourGang. She can be reached at ann@afrobeatradio.com.This story first appeared on her website. If you want to see Ann Garrison’s independent reporting continue, please contribute on her website at anngarrison.com.

She Can Keep Me, For One Month, By Azu Ishiekwene

Five Things We’re Doing To Fight Back Against Closing Of Civic Space In West Africa, By Kibo Ngowi

Tanzania: Maasai protesters in court over death of policeman