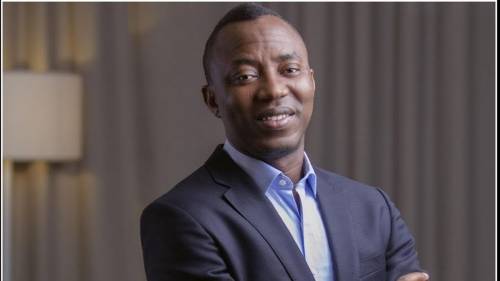 Only Sowore put his hands to the plough!

The moment Buhari’s government assumed power, it militarized our democracy and disabled the civic space, thereby subjecting dialogue, dissent or disagreement to a foreclosure.

Hence, the state rolled out its full arsenal of coercion, armed to the teeth, men (and a few women) of the secret police, elite squads of the police, with the army and air force everywhere to clamp down on civil demonstrations.

In fear of being apprehended, most civil rights activists, members of the opposition party, PDP, politicians and everyone with a voice quickly hibernated their opposition and maintained silence.

But one man dared the government with his full chest, led a #RevolutionNow nationwide protest against Buhari’s incompetence, corruption, electoral fraud, bad leadership, economic woes, and called for his immediate resignation.

Who is this man? His name is Omoyele Sowore.

Sowore, knowing that the situation needs an urgent surgical revolutionary action, swung into action with his comrades. But two days before the planned nationwide protest, the DSS kidnapped him and slammed him with bogus charges.

But On 5 August, the #RevolutionNow campaign was unfurled with protests in 14 cities and towns across the country. Arrests and the brutalities synonymous with our police and military were employed against the protesters.

Today, as we approach the 2023 general elections, most Nigerians seem not to be aware of the enormous contribution of Sowore to our civic space and the freedom they now have to express their views and oppose the government.

At the peak of the government’s militarized handling of our democracy, as a symbolic demonstration of their protest against autocracy and military-style repression, PUNCH (all our print newspapers, The PUNCH, Saturday PUNCH, Sunday PUNCH, PUNCH Sports Extra, and digital platforms, most especially Punchng.com) decided to prefix Buhari’s name with his rank as a military dictator in the 80s, Major General, and also refer to his administration as a regime, until they purge themselves of their insufferable contempt for the rule of law.

The National Assembly became very comfortable being a rubber stamp, while the judiciary did the biddings of the executive. The temples of justice, the court, was invaded and desecrated by the government’s DSS.

Instead of being deterred by Sowore’s arrest and persecution, members of his RevolutionNow, TIB, AAC, triggered further the #RevolutionNow campaign and it became the spark around which the national structures for our civic space to be concretized.

More Nigerians became emboldened and joined the protests against the social media bill. The bill was introduced by Muhammed Musa, a senator representing Niger East, to regulate the social media.

Sowore was live in the National Assembly to give a befitting burial to the bill when he spoke against it at its public hearing.

Sowore has demonstrated capacity, doggedness and faith in the Nigerian project than any one of those vying for the office of president in 2023. When there was no election, he was visible and active.

Between 2019 and the next election, 2023, he remains the only one who proved that he is more interested in Nigeria than an election. In and out of season, he stood through tick and thin, fighting for the oppressed, detained comrades and for the cause of justice.

This is not the kind of man to overlook or ignore for others. But unfortunately, most electorates are often peer pressured voters and are sentimental.

If 2023 is everything about the reward for justice, equity, fairness, Sowore stands out from the rest of the candidates contesting for president.

Mention one who spoke loudly against electoral fraud, injustice, the murdering of Deborah, the illegal detention of Agba Jalingo, etc.

Fellow, Nigerians, these issues are pivotal to governance. And anyone who sat on the fence all along but now want to lead this country will always be questionable in character, unfair to us and politicized the institutions of our democracy.

Let’s rethink these issues. Voting shouldn’t be done with sentiments. Every ballot is a signal to what means so much to us. If we cast to a man because of his tribe, we will reap tribal war. If we give it to another man because of rave of a soothing nomenclature, we will reap idiocracies.

But if we give it to Sowore, it is a message to the values that he represents, which are: economic prosperity, civil liberty, faith in country, war against corruption, justice, peace in the land, security and everything that will make life meaningful to all Nigerians.

Nigerians, remember the man who fought for you. His name is Sowore. Vote Omoyele Sowore for president.