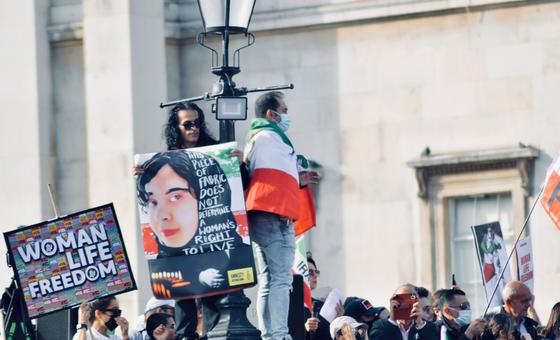 “We urge Iranian authorities to stop using the death penalty as a tool to squash protests and reiterate our call to immediately release all protesters who have been arbitrarily deprived of their liberty for the sole reason of exercising their legitimate rights to freedom of opinion and expression, association and peaceful assembly and for their actions to promote and protect human rights and fundamental freedoms through peaceful means”, they said in a statement.

In Tehran province, eight people were charged by the Islamic Revolution Court on 29 October with crimes carrying the death penalty, namely “waging war against God” or “moharebeh” and “corruption on earth”.

Two days later, the Tehran prosecutor announced that some 1,000 indictments had been issued in connection with recent “riots” in the province and that public trials were scheduled for a number of people “in the coming days”.

In blatant violation of the separation of powers, on 6 November, 227 members of Parliament called on the judiciary to act decisively against those arrested during the protests and to carry out the death penalty punishments.

“With the continuous repression of protests, many more indictments on charges carrying the death penalty and death sentences might soon be issued, and we fear that women and girls, who have been at the forefront of protests, and especially women human rights defenders, who have been arrested and jailed for demanding the end of systemic and systematic discriminatory laws, policies and practices might be particularly targeted”, they warned.

On 13 September, 22-year-old Mahsa Amini, was arrested by Iran’s morality police for allegedly failing to comply with the State’s strict rules on women’s dress, by wearing what authorities said was “an improper hijab”. She died in police custody.

Demonstrators in Sweden call for justice after the death of Masha Amini in custody of the “morality police” in Iran.

Since 16 September thousands of peaceful protesters have been arrested, including many women, children, youth and at least 51 journalists. Fourteen were reportedly released on bail, while 37 remain held – many in incommunicado detention.

“The crackdown on peaceful demonstrations has continued unabated, and the death toll has risen to at least 304 people, including 24 women and 41 children. Baluchi and Kurdish minorities have continued to be disproportionately affected by the repression”, said the experts.

Through grossly unfair summary trials, the Islamic Revolutionary courts have been used for years to sentence political activists, journalists, lawyers and human rights defenders, according to the experts.

The country’s criminal justice system relies heavily on confessions extracted through torture and other forms of coercion and duress to prove guilt.

Since nationwide protests in November 2019, the death penalty has been used widely under unsubstantiated murder or vague national security charges against individuals for participating in demonstrations.

In 2020, at least two individuals were executed following their participation in protests.

“We reiterate our call on the Human Rights Council to urgently take the necessary actions to hold a Special Session on the situation in Iran and to establish an international investigative mechanism, to ensure accountability in Iran and to end the persistent impunity for grave human rights violations”, they stated.

Click here for the names of the experts who participated in this statement.