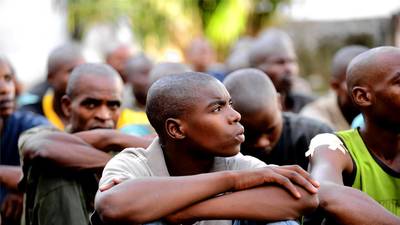 A youth identified as a 16-year-old corporal in the Rwandan armed forces sits with other prisoners in Kinshasha, capital of the Democratic Republic of Congo. The government accuses Rwanda of supporting rebels fighting in eastern Congo.

GOMA, Congo — It was not the bullet lodged in the officer’s gut, or the botched operation he’d had in a field hospital, that made the case so difficult for doctors in a Goma hospital.

It was trying to save the life of a Rwandan officer injured in the recent Congolese battle for the eastern city when Rwanda’s government insisted it wasn’t involved in the Goma fighting.

Doctors were convinced the officer would die if he wasn’t sent home to Rwanda, where he could get better medical care.

“His family in the military in Rwanda came and took him from here,” Dr. Jo Lusi, founder of the Heal Africa Hospital, said in an interview last month. He said the hospital treats wounded people from all military groups in the Democratic Republic of Congo.

The move apparently infuriated the Rwandan military. “They said, ‘Why did you allow this [officer] to go to Rwanda? If you take back wounded to Rwanda, it’s like proof,’ ” Lusi said. The Rwandan government has long denied it is supporting rebels in eastern Congo, its neighbor.

That assertion conflicts with the reports of outside observers. A November report by United Nations experts on the conflict in eastern Congo said Rwandan authorities had frequently facilitated the evacuation of casualties to Rwanda. It accused the regime of Rwandan President Paul Kagame of arming and commanding a group known as M23, associated with war crimes suspect Bosco Ntaganda. The British government said it had “compelling” evidence of such a link.

“The government of Rwanda continues to violate the [U.N.] arms embargo by providing direct military support to the M23 rebels, facilitating recruitment, encouraging and facilitating desertions from the armed forces of the Democratic Republic of the Congo and providing arms, ammunition, intelligence and political advice,” the report says. “The de facto chain of command of M23 includes Gen. Bosco Ntaganda and culminates with the minister of defense of Rwanda, Gen. James Kabarebe.”

Analysts say that without Rwandan forces, M23 would not have made its recent territorial gains. In a report leaked this month, the U.N. experts alleged that Rwandan forces took part in M23’s October attack and capture of Goma.

“If it was difficult before, now it is almost impossible to justify this belligerence from Kagame’s government,” Congo analyst Jason Stearns said in a recent article in Foreign Policy magazine.

Critics and human rights groups have criticized the Obama administration’s support for Rwanda despite evidence of chronic interference in Congo, where conflicts have killed more than 5 million people. However, there are signs of change in Washington’s position. President Obama called Kagame this week and asked him to end support for any rebel groups in Congo, according to a White House statement.

Rebels tied to M23 have perpetrated atrocities and human rights abuses, including recruitment of child soldiers, among them girls, the burning of houses and the killing of hundreds of people in ethnically motivated attacks, according to Human Rights Watch and the U.N. report. Dozens of forced recruits and prisoners of war were executed by M23, the report alleges.

Human Rights Watch also reported in September that M23 rebels were involved in killings, rape and forced recruitment of child soldiers, and summary executions of men and boys who tried to escape forced recruitment. The group has called for sanctions against Rwandan officials it says are responsible for backing the movement.

Human rights advocates have strongly criticized Susan E. Rice, American ambassador to the U.N., saying she was among those most responsible for America’s support for a government that continues to fuel the Congolese conflict.

Rice, who is close to Kagame, met with British and French diplomats in New York in October to discuss the crisis in eastern Congo, according to another article in Foreign Policy magazine last month. She also strongly opposed a push by France’s U.N. ambassador, Gerard Araud, for the U.N. to implicate Rwanda as a supporter of the rebels and hold up the threat of sanctions, according to the article.

“Gerard, it’s eastern Congo,” Rice said, according to the article. “If it were not the M23 killing people, it would be some other armed groups.”

America has long held that it’s better to work with Kagame than to alienate him with sanctions, but critics see the chronic fighting in eastern Congo as proof that protecting the Rwandan president from international censure hasn’t worked. Obama made his call a week after 15 prominent think tanks and rights organizations wrote him saying that the policy of quiet diplomacy had failed to stop Rwanda from incursions into eastern Congo and support for rebel groups.

The U.N. Security Council has condemned M23 and issued sanctions against its Congolese leaders, including Ntaganda. Last month the council said further sanctions against M23 and its supporters would be considered — without naming Rwanda. Analysts accuse Rice of delaying the release of the U.N. report on the conflict and intervening to prevent a council resolution on the Congo crisis from naming Rwanda.

An October report by the International Crisis Group, a think tank, called on the international community to suspend assistance to Rwanda, which relies on foreign aid to support its budget, and to consider a weapons embargo against it.

The British government last month cut aid to Rwanda, citing evidence that the regime in Kigali, the capital, backed the M23 rebellion. The U.S. has also cut some military aid, but it continues to provide substantial assistance.

In June, Human Rights Watch reported that 200 to 300 Rwandans were recruited in their homeland in April and May and taken across the border to fight alongside M23 forces. “Rwandan military officials have continued to recruit by force or under false pretenses young men and boys, including under the age of 15, in Rwanda to augment the M23’s ranks. Recruitment of children under age 15 is a war crime and contravenes Rwandan law,” it said in a later report, in September.

Rice’s intervention to protect Rwanda left Kagame’s government confident that international criticism would be minimal, according to a Rwandan official quoted in Stearns’ article.

“The question is not whether Rwanda is the Beelzebub or the savior of Central Africa; it is neither,” Stearns wrote. “But given the gravity of the crisis, and the significant support the United States was providing to the Rwandan government, simply giving Kigali a pass for repeated mass abuses was unacceptable and sent the wrong signal.”