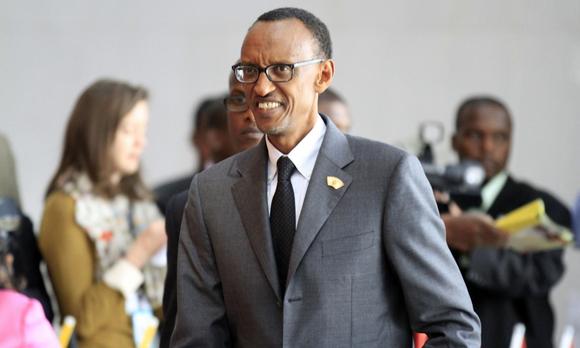 Rwanda’s President Paul Kagame arrives for the extraordinary session of the African Union’s Assembly of Heads of State and Government on the case of African Relationship with the International Criminal Court (ICC), in Ethiopia’s capital Addis Ababa, October 12, 2013.

(Reuters) – The United States says it is deeply worried about threats made by Rwandan President Paul Kagame against political opponents after one of his exiled critics was found murdered in a hotel room in South Africa.

The rebuke by Rwanda’s biggest national donor comes as the tiny state – which punches well above its weight in Africa’s turbulent politics – is winning Western plaudits by contributing peacekeepers to yet another conflict zone on the continent, Central African Republic.

“We are troubled by the succession of what appear to be politically motivated murders of prominent Rwandan exiles,” State Department spokeswoman Jen Psaki said on Thursday, condemning the recent killing in Johannesburg of Rwanda’s former Director of External Intelligence, Patrick Karegeya.

Relatives of the former spy chief and other exiled opponents of Kagame blame the Rwandan president for Karegeya’s murder, saying this the latest in a systematic policy of assassination of foes and defectors by the Kigali government.

Kagame and his administration flatly deny any involvement in the death of Karegeya, whose body, apparently strangled after a meeting with a mysterious business associate, was found in a posh Johannesburg hotel on New Year’s Eve.

South African police have said they are investigating but have not yet announced any arrests, despite confused reports of a group of Rwandan suspects being detained in Mozambique.

Last weekend, Kagame, who has won Western praise for rebuilding Rwanda after the 1994 genocide there, defended his nation’s right to self-defense against those who “betray”.

“We didn’t do it, but my question is; shouldn’t we have done it?” Kagame said at a January 12 prayer breakfast, clearly referring to the Karegeya case but without naming him.

“No one will betray Rwanda and get away with it. Regardless of who you are, there will be consequences,” he added.

State Department spokeswoman Psaki said these comments by Kagame were viewed with “deep concern” by the United States.

She delivered the diplomatic reprimand as the U.S. military started flying 850 Rwandan troops into Central African Republic, helping to shore up a struggling French and African peacekeeping operation that is trying to halt a wave of killings in the former French colony.

Over the past two decades, several foes of Kagame have been murdered by assassins in Africa and elsewhere, casting a pall of suspicion over his government even as it won lavish praise from Western leaders for being a model aid recipient and a staunch ally in trying to secure peace across restive Africa.

Analysts say Kagame bolsters Rwanda’s standing with the West by providing peacekeeping troops for hotspots such as Darfur, South Sudan and more recently, Central African Republic. The United States and most of Europe are loath to send their own troops to such zones, wary of domestic pushback.

“By doing these kind of jobs the Rwandans do sort of defend themselves against accusations of them being naughty in the DRC, or of being less than democratic at home,” South African defense and military analyst Helmoed Romer Heitman, who is an expert on African peacekeeping, told Reuters.

Opponents of Kagame at home and in exile say he runs an authoritarian state that does not flinch from silencing foes.

Kagame’s government has brushed off repeated accusations by U.N. experts that it backed last year’s insurgency by Tutsi-led M23 rebels in neighboring Democratic Republic ofCongo, where Kigali has intervened militarily before on national security grounds.

Western officials say Rwanda’s denials are not credible, and U.S. and European governments imposed punitive measures on Kigali to pressure it to halt its support for M23.

While no direct evidence has emerged to link Rwanda’s government to Karegeya’s killing, Kagame’s own comments indicate he is not troubled about angering donors or putting at risk foreign aid when he feels national security is at stake.

“I really don’t feel the necessity for politeness on this issue, no need for being diplomatic, of being politically correct,” Kagame said last weekend.

“They feel they can operate with a degree of impunity,” a Western security source who knew Karegeya well told Reuters, asking not to be named. “They have gone from hunting genocidaires to hunting their own people,” the source added.

In 2010, Nyamwasa was shot in the stomach as he drove into his Johannesburg home, surviving what his family said was an assassination attempt ordered by Kagame. Kigali denied this.

Theogene Rudasingwa, Rwanda’s former ambassador to Washington who along with Karegeya, Nyamwasa and others formed the opposition Rwanda National Congress (RNC), told Reuters Western governments shared the blame for Kagame’s policies, because they “protected (him) and have not helped Africa to bring him to account for the crimes he commits”.