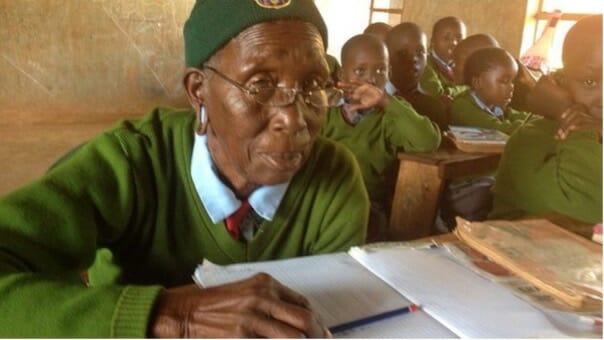 
The world oldest pupil has died in Kenya. Priscilla Sitienei died peacefully at home at the age of 100, her family said.

“Gogo”, which means grandmother in the local Kalenjin language, was what Ms Sitienei was affectionately called by many.

Her grandson Sammy Chepsiror, told Kenya’s The Standard newspaper “She died peacefully in the presence of some family members. We are thankful for the 100 years of her life. She made all of us proud.”

Ms Sitienei’s story became the inspiration for the French film Gogo Priscilla which lead to a meeting with France’s First Lady, Brigette Macron.

She told Unesco last year that she wanted to motivate young mothers to return to school.

“I wanted to show an example not only to them but to other girls around the world who are not in school, without education, there will be no difference between you and a chicken,” she said.

Ms Sitienei began attending Vision Preparatory School with her great-great grandchildren after she decided at age 90 to return to primary education, having worked for several decades as a traditional midwife.

She wasn’t able to attend school as a child but when the Kenyan government began subsidising primary school fees in 2003, it allowed her and other senior citizens, another chance.


The current record for the world’s oldest primary school pupil in the Guinness Book of Records is held by another Kenyan, the late Kimani Maruge.