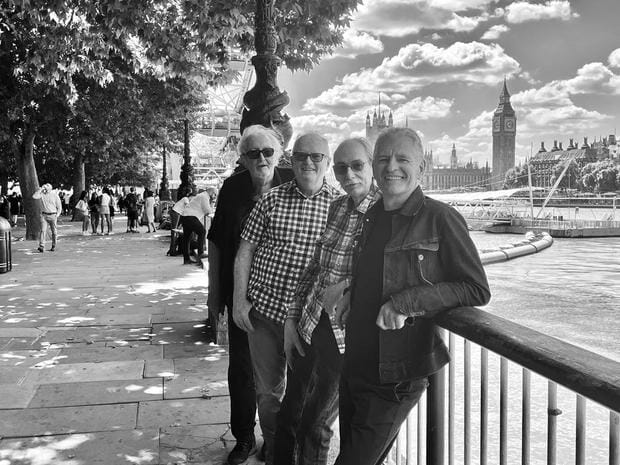 A Belfast musician drew on over 20 years’ experience of living and working in West Africa for his debut novel.

ohn McCullough spent five years on A Virtuous Killer, which follows a nurse trying to rescue her sister, one of a group of young women abducted by terrorist group Boko Haram.

His novel is inspired by real life events including the 2014 kidnapping of 257 Nigerian schoolgirls in Chibok. The abduction prompted the Twitter campaign, #BringBackOurGirls, supported by influential people such as Michelle Obama and Oprah Winfrey.

A Virtuous Killer is set in Northern Nigeria and Lake Chad where terrorism and political corruption are rife.

“The great temptation, of course, would have been for my first novel to be set in Northern Ireland,” says John.

“But because it wasn’t and I felt very strongly about the issues involved, I had to do a lot of research.

At the same time because it’s my debut novel, you’re learning the craft as you go.”

John with the members of Swift at London’s Southbank, 2022

John with the members of Swift at London’s Southbank, 2022

John wanted to ensure the content was as authentic as possible.

“I did feel a responsibility,” he says. “But by writing, if you like, the thriller, I thought I could get into the heads maybe of some of these dangerous people, both on the political side and the terrorist side, as well as make readers maybe feel closer to the characters and feel it a bit more because we have a tendency, especially if it’s something not in our immediate vicinity, to read it like a news report and move on to the next thing.”

Working across different continents hadn’t been on John’s agenda. At 18 he was “distracted by music” during his A-levels, playing both in the Belfast Youth Orchestra and at Queen’s, supporting visiting bands.

He then moved to London to study, meeting up with Belfast friends and forming Swift, a jazz-fusion band which won the title of London’s Young Jazz Musicians 1977. John cut short his career with the British Council and turned to music professionally.

Age 29, he re-joined the British Council, working in international development and cultural relations in London, Nepal, Cape Verde and Mali, among other countries.

John with the members of Swift at London’s Southbank, 1977

John with the members of Swift at London’s Southbank, 1977

“The main thing was Africa for me, I just felt a great affinity for Africa,” he explains.

“Before I even visited Nigeria, I’d spent eight years living in western and north Africa working in different countries. But Nigeria sort of grabbed me by the throat.

“The problems we had in the Troubles, if you magnify them, not 10 times, but about 100 times, 1,000 times even (there). And the amazing thing is that Nigerians are still resilient, they just get on with things basically, in a way that we did in the Troubles.”

“When you experience it and experience the resilience of the people despite all that, it really makes you want to sort of do something or at least it did for me. And try and actually make people more aware of it,” he says.

John McCullough with Lionel Ross, his publisher at i2i Publishing

John McCullough with Lionel Ross, his publisher at i2i Publishing

“It ruins your life,” he continues on the impact of kidnapping. “Someone comes and takes your daughter or your wife, your husband, your father, you’re forced to sell your house or whatever and put yourself basically into poverty to get your family back because there is no way the security forces will be able to help you.”

Music is something he continued to enjoy while working across the globe, says the 68-year-old.

“The first six years I was in Senegal, I was playing very regularly with American musicians and Senegalese musicians, doing a mix of African music, but jazz stuff as well,” he says.

“Then I went to Egypt and for about two years I played with (Egyptian drummer) Yehya Khalil. He used to look out for expatriates coming to Cairo. We used to see huge crowds.”

However, some of the regional posts meant he couldn’t commit to anything. Retiring at 63, he was “fired up” to get into music and writing.

“There was a great level of satisfaction in doing both. The book was really planned and it was a solid sort of five years, but the latter two years of that was also the Swift album.

“The big satisfaction for me was kind of showing myself and proving to myself and maybe proving to others that in your 60s, don’t think of it as ‘I’m retiring now’.

“If you have the mindset and can keep yourself fit and healthy, it can be a wonderful time to get into creativity.”

John worked on his debut novel for five years before publishing

John worked on his debut novel for five years before publishing

John is in the unusual position of having an album and a novel out in the same week, with his first published work of fiction coinciding with the resurgence of his band Swift, who last played together in 1979.

He recalls how they reunited after one fateful evening he spent listening to Radio Ulster’s Jazz World with Linley Hamilton on BBC Sounds.

“I sent an email telling him a little bit about Swift and how we’d come from Northern Ireland, played in the late 70s, won an award and done all these things,” explains John, who now lives in Chester.

“Within five minutes of sending the email on a Friday night, he replied, asking me for my phone number.”

A conversation started and the following week Linley played Swift on air, then every fortnight.

“I had to get back in touch with these guys I hadn’t spoken to, some of them in 40 years,” explains John.

Swift performing around 1977 at the Riverside Arts Centre, Hammersmith

Swift performing around 1977 at the Riverside Arts Centre, Hammersmith

“We decided if this guy is so enthusiastic, why don’t we try and do that album we never got round to.

“Fortunately, Laurie the guitarist had spent a lot of time in those intervening years developing an expertise in recording. We were able to use Zoom to communicate and remote record, both among ourselves and with guests, including Linley who played on the album and other musicians to produce it.”

The group produced In Another Lifetime which came out in the same week as A Virtuous Killer.

“If you’ve got some financial security, then it’s a wonderful opportunity to give (free) rein to your creativity,” says John of his life following retirement.

“Some go and play golf two or three times a week or they take off to a holiday home, and just enjoy (retirement). Fair play to them; if they’ve worked hard all their lives, good luck to them.

“I felt this is what I wanted to do because I’ve been held back from doing it because of lack of time and the need to make a living.”

In Another Lifetime is available from download sites and as a CD on swift6.bandcamp.com. A Virtuous Killer, i2i Publishing, is available in bookshops, on Amazon and Kindle​