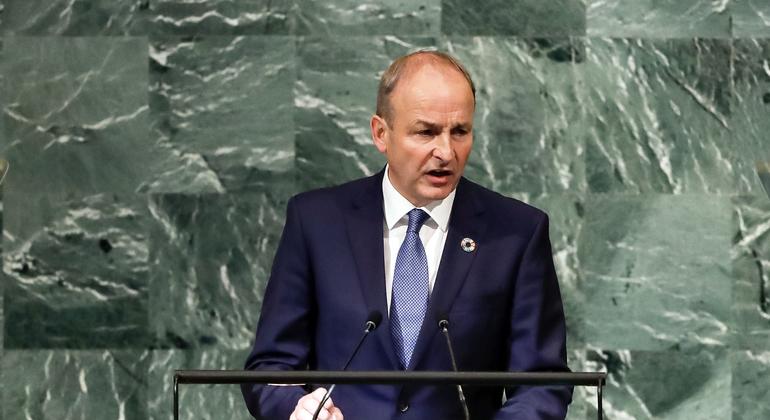 Noting that 2022 is Ireland’s centenary year as a sovereign country, and Mr. Martin pointed out that one of the first acts of the Government was to join the League of Nations, the predecessor to the United Nations.

A continued commitment to multilateralism

The Taoiseach outlined Ireland’s continuing commitment to multilateralism, citing initiatives undertaken by the country as an elected member of the Security Council, the contribution of hundreds of Irish UN peacekeepers, and work on resolution 2594, the Council’s first-ever resolution on Peacekeeping Transitions.

Ireland, said Mr. Martin, led negotiations to agree a Political Declaration on the use of Explosive Weapons in Populated Areas earlier this year. The Declaration, he declared, “is a significant milestone,” which includes a number of ambitions actions to address impacts of these weapons.

However, Mr. Martin also reported Ireland’s deep frustration at many aspects of the Council. He mentioned the failure to adopt a resolution on Climate and Security, after it was vetoed by Russia, and claimed that the Council has not acted decisively to deal with the situation in Tigray, northern Ethiopia.

He went on to note Ireland’s firm commitment to a two-State solution in Israel and Palestine, but said that “we are no nearer today to that aim than we were when we joined the Council 18 months ago; and, truth be told, long before that”, citing the continued building of Israeli settlements that, he said, “continue to undermine the viability and territorial contiguity of a future Palestinian State, and to jeopardise the two-State solution”.

On Afghanistan, Mr. Martin pointed to Ireland’s defence of the human rights of the Afghan people, particularly women and girls, and we have increased our humanitarian aid. “The mandate for the UN mission in Afghanistan, adopted in March, was directly informed by the courageous activism of Afghan women,” he said, “and we have pushed for accountability for the Taliban’s actions”.

Turning to the issue of global food insecurity, Mr. Martin said that Ireland has responded to the crisis by increasing humanitarian aid, contributing 78 million Euro for the Horn of Africa, and funding other severely affected countries and regions, including Yemen, Afghanistan and the Sahel.

Other initiatives include an additional €50 million over three years specifically to tackle acute child malnutrition, increased core funding to the UN Central Emergency Response Fund (CERF), and funding and programming for humanitarian emergencies that is adapted to underpin the country’s climate, development and peacebuilding interventions.

Ireland will make a new contribution of €65 million over three years to the Global Fund to Fight AIDS, Tuberculosis and Malaria, a 30 per cent increase on previous contributions, to support the Fund’s important work against these diseases, and the related strengthening of health systems, he continued.

Mr. Martin said that hunger and conflict are a priority for Ireland’s Security Council term: “conflict is now the main driver of hunger, reversing gains made over the last decades. We are failing in the challenge to reach zero hunger”.

He added that Ireland has committed to helping partner countries on their journey towards sustainable, resilient, and nutritious food systems, and declared that, at the COP27 UN climate conference in November, Ireland will be at the forefront of efforts to combat the climate emergency.