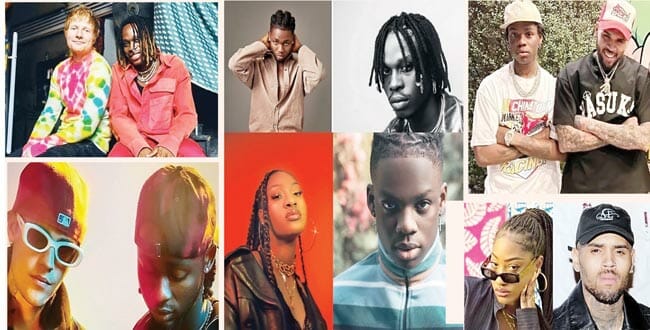 Over the years, the OGs in the Nigerian music industry like Wizkid, Olamide, Davido, Burna Boy Tiwa Savage etc. have worked hard to put Nigerian on the world map by conquering massive stages across the globe, getting featured on top Billboards, studying how the music business is done and building on the strength of the African music market.

This, in a way, has paved a way for the new artists in the industry doing Afrobeat and they keep working on the developments and recognition the genre of music has gotten across the globe. One of many major collaborations with Nigerian artists by their foreign counterparts was evident in Beyonce’s Lion King Album which featured six Nigerian music stars – Wizkid, Burna Boy, Yemi Alade, Tiwa Savage, Mr Eazi and Tekno.

In a recent interview with Saturday Tribune, veteran actor and music enthusiast, Jude Chukwuka reacted to the rate at which foreign artists now jump on Nigerian tracks easily these days. According to him, these artistes understand that Nigeria’s music market is one of the biggest in the world and number one in Africa. So, pitching their tents with Nigerian artistes is a way for them to sell their brands and music to a larger audience.

Below is a list of top foreign collaboration with Nigerian rising artistes in the last eight months:

Ed Sheeran and Fireboy DML in London on the set of Peru’s video in Lodon. Photo Credit: Google

On the 23rd of December 2021, Nigerian music star and YBNL artiste Adedamola Adefolahan Fireboy DML in a huge surprise to his fans worldwide dropped the Peru remix having announced earlier via his social media pages that he teamed up with Grammy Award-winning British singer and song writer, Ed Sheeran in the remix of the hit track which was an earworm and became anthem throughout December through the New Year. The remix came at a time the song was already gaining ground worldwide and it might not come as a surprise to music experts that a foreign artiste would be interested in jumping on the lyrics, as it was the song of the moment. In an several interviews, Fireboy explained how the British stars slid into his DM accepting to do a remix of the song ‘Peru’ with him, which became a huge success for Afrobeat.

Another huge foreign-Nigerian artistes’ collaboration this year was Omah Lay featuring Justin Bieber. Serving as his first official single in 2022, especially after clinching the Next Rated Artiste Award at the Headies some months earlier, Omah Lay also teamed up with Canadian music star, Justin Bieber in track ‘Attention’. The track also served as a pathway to his recent Album ‘Boy Alone’, a follow up album to his first album ‘What Have We Done’ which was released in 2020. Although his ‘Get Layd’ Extended Playlist was a huge success in 2020, the collaboration has been a major boost to his fast-rising career. Speaking on how he got to feature Justin Bieber on the track, Omah told Bilboard “I was in the studio one day with Harv during a recording session in Los Angeles. As soon as I heard the beat, the lyrics were already in my head. We didn’t even spend 30 minutes making the song. Harv called Bieber and I FaceTimed Justin Bieber for the first time in my life. Later on, Harv got to play the song for him, and before I knew it, he sent in his verse and the song was good just like that.”

Jonzing World (Mavin Music) frontline act, Rema has undoubtedly enjoyed huge attention and love from music lovers and his fans from and outside Nigeria since he dropped his breakout track ‘Dumebi’ in 2020. However, in 2022, he has decided to take his craft to another level as the whiz kid has, in this year alone, had teamed up with several foreign artistes. In March 2022, he enlisted American singer Chris Brown as one of the artistes he featured in his ‘Rave And Roses’ album. The track entitled: ‘Time N Affection’. On this same album, Rema had American singer and rapper-songwriter 6SLACK and British rapper AJ Tracy. It has, however, been a harvest of collaborations with foreign acts for Rema in 2022 as he also got featured in The Weekend’s Wild, alongside Lil Nas X.

One of the biggest recognitions to be enjoyed by a young Nigerian artiste of recent was also Temilade Openiyi, better known as Tems getting featured in Drake’s last album ‘Certified Lover Boy’. The track entitled: ‘Fountain’, quickly became a fan favorite on the album and saw the track debut at number one on the Billboard Hot 100. This was a huge recognition from the youngstar who has just had a good time with Wizkid’s essence. Drake’s album ‘Certified Lover Boy’ is a 21-tracked album which also features high profiled musical artists like Lil Baby, Lil Durk, Giveon, Jay-Z, Travis Scott, Future, Young Thug, 21 Savage, Project Pat and many other lyrical geniuses.

Tems has continued to enjoy massive recognition internationally as the fast-rising singer gained another milestone after featuring on Future’s hit song ‘Wait for u’ off his ‘I Never Liked You’ album. The track ‘Wait for U’ which also featured Canadian rapper Drake also debuted at number 1 on the Billboard Hot 100 and Tems made history as she became the first Nigerian artist in history to attain such a feat.