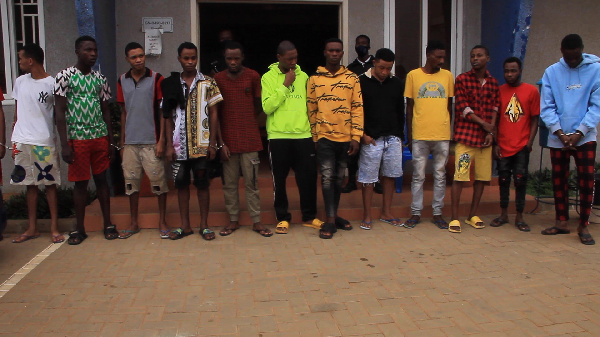 The Nigerian government should look into the treatment of Nigerians in Ghana because there are reports of police harassment and extortion from Nigerians in the country. A Ghanaian friend recently shared a Facebook post on some police raids that targeted Nigerians. His post reads: “My apartment has been raided by the Ghana Police 4 times in less than a year. Whatever reason you think for this. It’s worse! The apartment used to be occupied by some Nigerian men who were tired of being harassed by the police”. So many Nigerians in Ghana suffer constant harassment by the police. The harassment has gone on for too long that some are tired. Yes, some Nigerians are tired of being targeted, stopped, arrested by the police in Ghana.

As the post further reveals, the raids have become a pretext for extortion: “The neighbor told me that they packed and left the day after the final raid; after they had to find 7000 Cedis bribe for the police to bail themselves out. They were not the only Nigerians who packed and left. More than five apartments became available after that raid”.

So raiding apartments where Nigerians live has become a lucrative business for the police in Ghana. Police officers extort thousands of Cedis from Nigerians, then let them go and later return to raid and extort money from them again. Nigerians have become easy prey for the Ghana police. Nigerians have become a cash cow for Ghanaian authorities. Take a look at the next part of the post:

“When I first got the apartment, even before I had finished cleaning it up, police officers showed up in Rambo style, entering into the apartment without knocking, asking where the Nigerians are. I explained to them that I was the new tenant and did not know of anyone else. Because of how the apartment was in disarray, they nodded along and left”.

Look, this was not a random raid for illegal occupants. It was a targeted police action. There are nationals from many west African countries who are living in Ghana. When I was in Ghana, I met Liberians, Sierra Leoneans, and Ivorians who were living in the country and who had taken Ghana as their home. In fact, on one occasion, I met some Fulanis in the Northern region. They entered Ghana on horses through the border with Burkina Faso. They had no travel documents.

The police in Ghana are not raiding apartments asking for Liberians, Sierra Leoneans, or Nigeriens who were illegally staying in the country. No, the police raided apartments asking: “Where are the Nigerians? So, the Ghana police have specifically been instructed to go after Nigerians!

The post recounts other incidents of police harassment:
“The second time this happened, I was in my office while some friends were in the kitchen. The police surrounded the apartment, some entering from the front and some from the back, shouting and asking where the Nigerians were. I could see the fear in my friends’ eyes. I stepped in with some jokes to calm nerves, and we even offered them food to calm their nerves. The third time this happened, I had learned to keep my doors locked at all times. I heard banging on the door and someone trying to forcibly open the windows. I opened the door and a police officer rushed past me asking if I am Nigerian and where the Nigerians were. Today, I was not home. My girlfriend was. The police came again asking for Nigerians. I came home to find their pickup still parked outside. They were moving from apartment building to apartment building looking for Nigerians. Their case: they received a tip that there are Nigerians in the area who smoke. The day before, they had raided some apartments and caught themselves some Nigerians who ultimately had to pay about 6000 Cedis, I am told, to be left alone. “.

In conclusion, the post states: “These raids usually happen on a weekend. The officers are always different. They always carry weapons. They always enter forcefully. They are always targeting people who look different. I am beginning to suspect this is not sanctioned by Ghana Police. Why would the state sanction xenophobia? I am also beginning to suspect that when they run out of Nigerians to do this too, Ghanaians who are different would be the target. Most of these Nigerians targeted, are hard-working members of the community, trying to survive in their sister country. They are only guilty of being Nigerian in Ghana”.

What this kind-hearted Ghanaian has recounted is definitely the tip of the iceberg of abuse, harassment, maltreatment, and extortion that Nigerians, who are living in Ghana, suffer at the hands of the police. Probably, Ghanaian police are imitating the police in Nigeria. They have realized that the Nigerian police abuse and brutalize their citizens with impunity. They are now extending the abuse to Nigerians in their country. Police abuse of Nigerians should not be an excuse for this horrific treatment. Ghana police must be called to order. They should stop targeting, and extorting money from Nigerians.
The government of Ghana must rise to its responsibility and end this official witch hunt and maltreatment of Nigerian nationals who are living in the country.

The government should know that there are at least 500, 000 Ghanaians living in Nigeria.