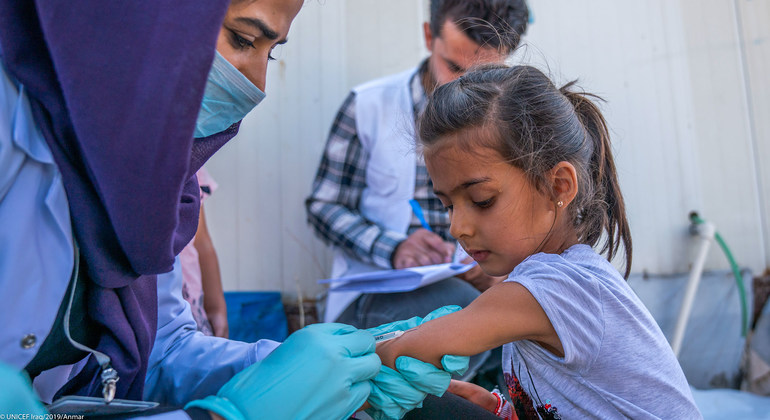 This is the highest number since 2009, and nearly four million more than recorded in the year preceding the crisis, according to data from the World Health Organization (WHO) and the UN Children’s Fund, UNICEF.

“Even as countries clamour to get their hands on COVID-19 vaccines, we have gone backwards on other vaccinations, leaving children at risk from devastating but preventable diseases like measles, polio or meningitis,” said Tedros Adhanom Ghebreyesus, the WHO Director-General.

From bad to worse

The pandemic caused widespread disruption to immunization services, with South East Asia and the Eastern Mediterranean most affected.

Resources and personnel were directed to COVID-19 response, clinics were closed or hours were reduced, while fear of virus transmission, lockdown measures and transportation difficulties kept people from accessing healthcare.

As a result, the number of children not receiving vital first vaccine doses increased across all WHO regions.

Henrietta Fore, the UNICEF Executive Director, warned that lives are at stake.

“Even before the pandemic, there were worrying signs that we were beginning to lose ground in the fight to immunize children against preventable child illness, including with the widespread measles outbreaks two years ago,” she said.

“The pandemic has made a bad situation worse. With the equitable distribution of COVID-19 vaccines at the forefront of everyone’s minds, we must remember that vaccine distribution has always been inequitable, but it does not have to be.”

Increasing numbers of children missing out on at least some vaccine doses are now found in middle income countries, the agencies said.  India, for example, has seen DTP-3 coverage fall from 91 per cent to 85 per cent.

A troubling picture has also emerged in the Americas region, due to factors that include funding shortfalls, vaccine misinformation and instability.  Just 82 per cent of children there have been inoculated, down from 91 per cent in 2016.

As the world emerges from the pandemic, the UN agencies and partners, including Gavi, the Vaccine Alliance, are calling for urgent recovery and investment in routine immunization.

They are supporting countries through measures such as restoring services and vaccination campaigns, rectifying gaps in coverage, and ensuring that COVID-19 vaccine delivery occurs alongside, and not at the cost of, childhood vaccination services.