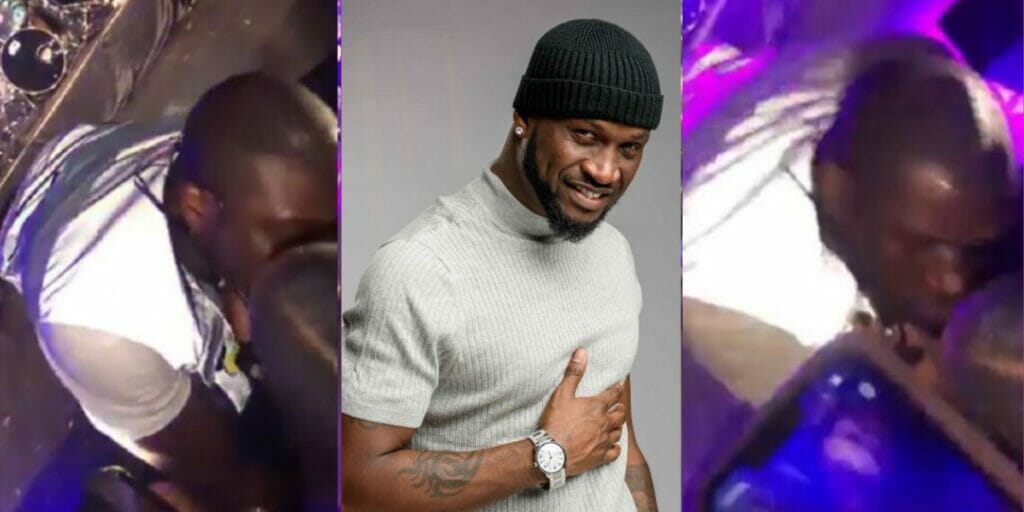 It can be a good thing as entertainers and celebrities become more relatable to fans. It however can go very left quickly as huge platforms give more spotlight and meaning to seemingly mundane things.

Nevertheless, these moments spur conversations and invoke reactions that are noteworthy.

In view of that, here are the top 5 bizarre occurrences that happened in the Nigerian entertainment industry this week.

Peter Okoye caught in steamy kiss with a fan

Another video has surfaced of Peter Okoye aka ‘Mr. P’ locking lips with a fan at a concert.

Psquare is currently on a world tour called #Psquare100CitiesWorldTour. Before this world tour, brothers Peter and Paul Okoye were involved in a feud that caused them to split. The duo split in 2017 but are now back together and making music again.

In a video that went viral last month, Mr. P was seen performing the hit song ‘Beautiful Onyinye’ with his twin and bandmate, Rudeboy, on the revival tour.

During the performance, Mr. P was seen firmly holding a lady’s head with both hands and then planting a peck on her lips.

However, things have moved from a peck to downright steamy. A new video has emerged and the singer is again seen locking lips with another fan.

The viral video has garnered a lot of attention and many people wonder if the singer’s wife approves.

The release did not go down smoothly with Nigerians. With reactions ranging from “What is this?” to “Has Tiwa transitioned again from gospel?” it’s safe to say that many Nigerians expected more.

The most interesting remark so far was given by Twitter adviser Daniel Regha. Regha shared his thoughts on the new song, advising Nigerian musicians to stay true to their creative identities and avoid following every fad.

We are not so quick to judge Tiwa’s new song though. Nigerians have been known to dislike a song during its release and two weeks later say it is the best thing after sliced bread.

Big Brother Naija ex-housemate Tacha underwent a liposuction procedure done in Dubai. Taking fans through her recovery journey, Tacha, in a video, revealed that she has literally become a kid again because she hasn’t been able to do some basic things by herself.

Twitter skit-maker Layi had something to say about this.

For context, Tacha is an ambassador of GETFIT brand, a brand that specializes in waist trainers and body fit accessories.

We all know Tacha to be someone who doesn’t mince words. She wasted no time with her comeback.

Carter Efe, who makes skits, and Berri Tiga, who is on the rise as a singer, have been fighting over their hit song “Machala.”

The song “Machala,” which is a tribute to Wizkid, has gone viral on social media sites.

The trouble between Efe and Tiga started when they couldn’t agree on who owned the song.

In a live video, Efe raised an alarm that Tiga is allegedly trying to cheat him on the revenue from the song.

Blaqbonez, the Nigerian rapper, made the mistake of weighing in on the ownership saga.

In a series of tweets, Blaqbonez called out Efe for offering such a deal to the artiste.

“You no write song, you no produce beat but you want 95%. Wow. Forget music business, forget ‘I dey help you’ common human decency tells u that u should favor the creative! The one that brought the music out of thin air,” he wrote.

Efe’s answer was to say that the rapper was always “opposing” him. Blaqbonez was also accused of jealousy by the skit-maker.

It didn’t take long before ‘gbas gbos’ ensued. See the verbal exchange below.

It’s interesting to note that in the midst of all these, Wizkid who the song is about, has been quiet.

Tems told GQ magazine in a recent interview that she quit her job as a digital marketer in 2018 because it “made her depressed.”

The singer of “Damages” said that quitting her job also hurt her because she was having trouble paying her bills.

Tems said it was hard to take care of her family. She also said, “I couldn’t look after anyone.”

“There were times when I was not just broke – I was broke and hopeless. I used to steal food. I used to go to my aunty’s house just so she could give me food to take home,” she said.

“I just felt like, What is the point of me existing right now? You have to remember those times. Because that person does not exist anymore,” the singer said.

Although many people have found this hard to believe, the singer’s previous struggles still remain her experiences. Everyone goes through trying times. Yes, some of these times are more intense for some but it doesn’t diminish the struggles of others which are also very real.