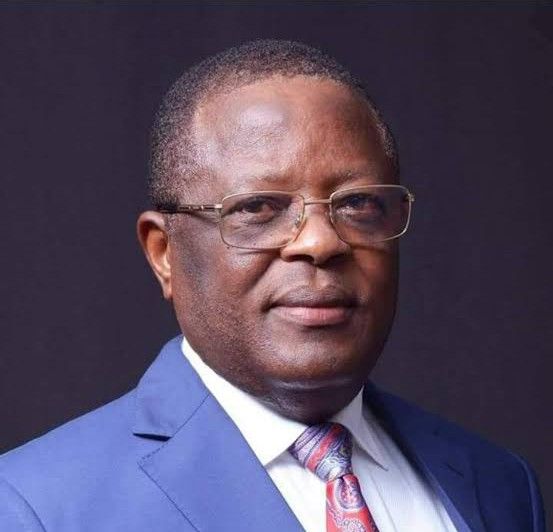 Having eaten too much while the rest of Ebonyi people – including civil servants who are poorly remunerated – almost starved, Dave Umahi, governor of the state, will leave office in 2023 with protruding stomach as one of the legacies of his eight-year stewardship in the state. Umahi, today, has a big stomach, and already sees himself as a very big man. Back in the day when we were kids, a big man was a man who had a very big tummy. It was for us, the only clear evidence that a man had arrived. And Umahi who, perhaps, still has such idea that a man’s ‘bigness‘ can be measured by the size of his belly, apparently looks himself, every now and then, in the mirror, and concludes that, ‘Yes, I have to be the biggest man around now in Igbo land,’ which could be why he has also developed a very fragile ego.

No doubt, a governor is as big as it gets, and of course, big men often have big ego, especially those who stumbled on wealth. It’s not strange, therefore, that Umahi has become very touchy. In Ebonyi where he reigns much like an emperor, he brooks no opposition, and not even criticisms are allowed. And if anyone is unwise to sing what is not music to his ears, they should be ready to receive the police as guests and made to face some very ridiculous charges in court. A certain Chief Abia Onyike, a former commissioner for information in the state, knows this too well, and so do journalists who have dared to write what he considers unfavorable report.

When in late 2020, Umahi decided that in the interest of his presidential ambition, he should defect to the ruling APC, having perhaps realised that with people like his Rivers State counterpart, Nyesom Wike, he may not have his way in the PDP, he expected every Ebonyi stakeholder to scurry up to him in his new party and quickly pledge allegiance. So, when this did not happen, Umahi declared war on everyone, including former senate president, Anyim Pius Anyim. Talk about nza, the tiny bird who forgot himself after a heavy meal and challenged his chi to a fight.

Umahi imagines that he must have everything his way, and that everyone must queue behind him and defer to him or he raises hell. He must dictate to everyone, even to Ohanaeze Ndigbo, and if the apex Igbo sociocultural group is rash enough to suspend his man for gross indiscretion, Umahi will throw tantrums, for how can Ohanaeze not bow at the feet of a man who is now so big that there cannot be any doubt about his position as the supreme leader of Ndigbo?

But it’s obvious that Umahi is deluded. No doubt, he has built infrastructure in Ebonyi – even if there are controversies about whether he uses his companies or whether he is claiming ownership of structures built with state resources – but building infrastructure in Ebonyi cannot automatically make one a presidential material. One has to have pedigree, and that cannot be gotten by developing a fragile ego and turning oneself into an emperor in the little space one governs. Unfortunately, Umahi has a very exaggerated idea about his self worth and this is becoming a big problem, not just to him, but to Ndigbo and their quest to produce the country’s president in 2023.

Historically, the greatest challenge Ndigbo have faced in their quest for relevance in national politics, is that everyone wants to be number one, even when they have no chance of getting anywhere. And if they cannot be, then nobody else should. We’ve seen the ‘pull him down syndrome’ play out time and time again, and clearly that’s what Umahi has resorted as it’s becoming clear that Pius Anyim will be the candidate to beat in 2023.

The Ebonyi governor, having seen the amount of support the former senate president is getting among the Igbo in his quest to be president, has gone extreme with his childish tantrums. It’s amazing how an individual will grow into an adult, but his brain still functions like that of an infant. After Igbo PDP stakeholders met in Enugu on Thursday and endorsed Anyim’s presidential bid, Umahi’s hireling who run a Facebook page, Ebonyi Online, through which they pour invective on Anyim, posted a press release issued by one faceless group probably working at his behest asking that the likes Adolphus Wabara, former senate president and Enyinnaya Abaribe, senate minority leader, who had at different fora endorsed him, withdraw such endorsement.

The group which identified itself as South East Democratic Civil Society Coalition (SEDSOC), in the press statement signed by a certain Chief Willy Ezugwu – apparently the new chief of fifth columnist in the Southeast – had argued rather unintelligently, that Anyim’s endorsement is “hasty and self serving,” as according to them, “The South East has eminently qualified persons capable of transforming Nigeria if given the chance by the electorate to serve as President in 2023.”

The eminently qualified persons spoken about by the group of jobbers must, of course, include the likes of Umahi. Such a laughable display of lunacy. But they would soon take the insanity notches higher. Late last week, hired thugs went to destroy a statue of Anyim in his hometown, an insane action gleefully shared by handlers of the same pro Umahi facebook page, Ebonyi Online, as evidence that the former SGF has been rejected in his own homeland. Ebonyi, by the way, has become a volatile state, with armed thugs unleashing mayhem on both perceived and real opponents of the powers that be. Indeed, the whole show would have been hilarious, if not that it has continued to manifest, sometimes, in very brutal attacks on such opponents, even as it has the potential to constitute a serious dent on the quest for Igbo president in 2023. 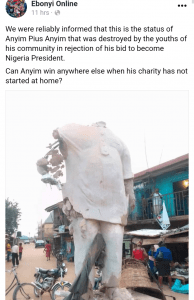 Sadly, it’s been the case in the past and Umahi is not attempting anything new. Time and time again, when there is need for the Igbo to rally and demand for power, little minds will emerge from everywhere to throw spanner in the works. In 2003, when the quest for Igbo president of Nigeria was crystallising, many wanted to contest, even when it was obvious that the late former vice president, Dr. Alex Ekwueme, was clearly the best candidate and the only person with enough political clout to win. It didn’t matter, they simply wanted to run against him, spurred on by their ego and pettiness, and some perhaps to injure his chances for a mess of pottage. Of course, a combination factors ultimately ensured that Ekwueme lost out, once again, to Olusegun Obasanjo, the then president who had emerged PDP candidate and eventually president after Ekwueme was outmanoeuvred at the Jos convention in 1998. 2003, the last time Ekwueme contested, would be the last the Igbo credibly challenged for power at the centre. Subsequently, others, mostly flyweights, contested as ‘also runs.’

Again, ahead of 2023, easily the most critical year in the modern political history of Ndigbo, when their quest for power will be both a quest for equity and justice, as well as a moral responsibility on Nigeria, the trait is emerging even before the real battle starts. While it is clear to everyone that Senator Anyim, and perhaps, former Anambra State governor, Peter Obi, are the two individuals with the necessary reach and political leverage to credibly challenge for power in Abuja, particularly within the PDP, every Tom, Dick, and Harry wants to run. But this is not the problem. There is nothing wrong with anyone from anywhere wanting to be president. Indeed, competition for power is the hallmark of democracy, and in every zone of Nigeria, people have competed and continues compete with one another. In the Southwest for instance, the likes of Bola Tinubu, Yemi Osinbajo, Kayode Fayemi, among others, are working hard to garner the support of their people and the rest of the country.

However, apart from the fact that the Southeast, given its historical disadvantage, can ill-afford this sort of ‘sibling rivalry,’ what is remarkably different is that as opposed to promoting themselves, the clowns that dot the political landscape of the zone, resort to pulling down those ahead of them, which is what makes the Umahi scenario in Ebonyi particularly painful. Granted that the Ebonyi governor has the right to seek to be president, even if he has no chance of winning, but every sane Igbo person who wants power should focus on promoting himself at this stage, and not dwell on attacking another who is doing so.

It is particularly surprising that people who are not in the PDP want to poke their noses into the affairs of the party in the Southeast, and dictate to stakeholders who to endorse and who not to endorse. The obsession is simply incomprehensible. Sadly, while the little minds are focused on pulling their own champions down, they are travelling to Abuja with bags of money to feed others hoping that they’d be favoured by those who presumably hold the levers of power in the country. But they have no idea. A man who helps to destroy his own warrior on account of petty envy or just utter myopia, has only made himself weak and vulnerable, and cannot be trusted by his rival. Umahi should be reminded that where he is headed there is no road. At the end day, he would make mockery of himself and destroy his own political career.

Obi Nwa Uballa, a concerned South Easterner wrote from Lagos State. He can be reached via [email protected]

Note: Articles published in the opinion section of this newspaper are those of the authors and do not reflect its editorial policy.