More of missing schoolgirls could have escaped but were too frightened because of threats to shoot them, says 19-year-old 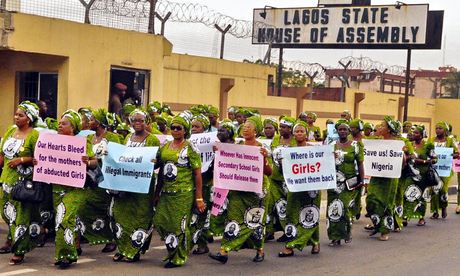 Women march in protest in Lagos, Nigeria, over the failure to rescue the 273 students from the Chibok Government Girls Secondary School who are still held captive. Photograph: EPA

One of the teenagers who escaped from Islamist abductors said the kidnapping was too terrifying for words and she was too scared to go back to school.

Science student Sarah Lawan, 19, told the Associated Press on Sunday that more of the 300 girls and young women who were seized could have escaped but they were frightened by their captors’ threats to shoot them.

Lawan spoke in a phone interview from Chibok, her home and the site of the mass abduction in north-east Nigeria. The failure to rescue 276 of the students, who have now been held for four weeks, has prompted international outrage. “I am pained that others could not summon the courage to run away with me,” she said. “Now I cry each time I come across their parents and see how they weep when they see me.”

Police said 53 students escaped, and that captors were threatening to sell those still held into slavery.

Lawan said other students who escaped later told her the abductors had spoken of their plans to marry them.

She said the thought of going back to the burnt-out remains of Chibok government girls secondary school terrified her.

“I am really scared to go back there but I have no option if I am asked to go because I need to finish my final-year exams which were stopped half way through,” she said.

In churches across Nigeria, congregations prayed for the students, whose plight has brought together ordinary people in a year that had seen growing dissension between Muslims and Christians, disagreements exacerbated by the increasingly deadly attacks of theBoko Haram militants.

Africa‘s most populous country of 170 million has almost equal numbers of Christians and Muslims.

A Nigerian security expert warned that the militants may have laid landmines to discourage any pursuit.

“Even as they go along abducting children, they are also going after food, grabbing food,” former Nigerian air force commodore Darlington Abdullah told Sky News, suggesting that starvation may force the extremists to abandon the students.