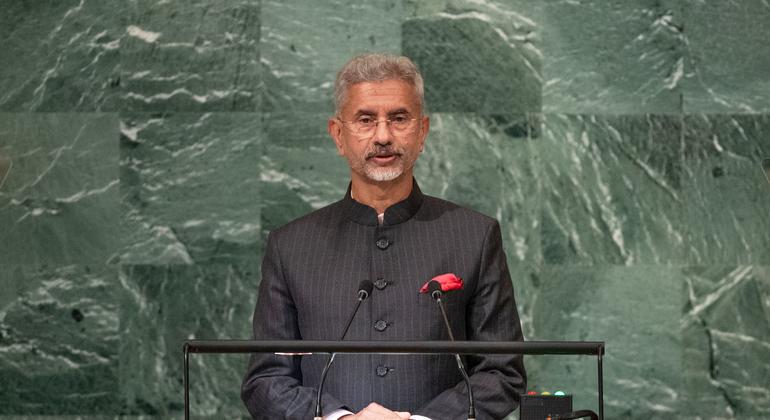 The Minister outlined India’s commitment to multilateralism, evidenced, he said, by the decision to supply vaccines to over 100 nations, provide disaster relief to those in distress, and partner with other countries, with a focus on green growth, better connectivity, digital delivery and accessible health.

Mr. Jaishankar declared that India is filling gaps in humanitarian needs in nearby countries and regions, mentioning the supplies of 50,000 metric tonnes of wheat and multiple tranches of medicines and vaccines sent to Afghanistan, the extension of $3.8 billion worth of credit to Sri Lanka for fuel, essential commodities and trade settlement, and the supply of 10,000 metric tons of food aid and vaccine shipments to Myanmar.

Whose side are we on?

Turning to the war in Ukraine, Mr. Jaishankar raised the question of whether India sides with Ukraine or Russia.

He went on to note that, with food, fuel, and fertilizer costs rising, it is in the interests of the international community to work constructively to find an early resolution to the war.

Noting that the COVID-19 pandemic has called into question the over-centralized nature of globalization, Mr. Jaishankar said that the world is poised for “transformational change”. The war in Ukraine and climate events have also, he continued, added to the disruption the world is already facing.

The Minister declared that India is pursuing climate action and climate justice, and stands ready to “support any collective and equitable endeavour to protect our environment and to further global wellness.”

India’s approach, he explained, is based on principles of mutual respect and national ownership with a commitment to sustainable development for all, and he announced that, as it assumes the presidency of the G20 organization of advanced economies, India will work with other members to address serious issues of debt, economic growth, food and energy security and the environment.

India will end its time as a non-permanent member of the UN Security Council in 2022, and Mr. Jaishankar noted some of the country’s achievements during its tenure.

At the Security Council, he said, India has focused on concerns such as maritime security, peacekeeping and counter-terrorism. On the latter, he mentioned the special meeting of the Counter Terrorism Committee this year, hosted in India, which chairs the Committee, and invited Member States to participate.

The meeting will focus on new and emerging technologies, and Mr. Jaishankar said that a new global architecture is needed, in response new technology tools that are being deployed against open, diverse and pluralistic societies.

“Having borne the brunt of cross border terrorism for decades, India firmly advocates a ‘zero-tolerance’ approach,” announced Mr. Jaishankar. “In our view, there is no justification for any act of terrorism, regardless of motivation.

And no rhetoric, however sanctimonious, can ever hide blood-stained hands”.\

Reforming the Security Council is needed because is currently “anachronistic and ineffective,” claimed the Minister. He described it as deeply unfair, denying entire continents and regions a voice in a forum that deliberates their future.

“We believe and advocate that this is not an era of war and conflict,” concluded Mr. Jaishankar. “On the contrary, it is a time for development and cooperation…It is vital that we continue to believe in the promise of diplomacy and the need for international cooperation.”