“Terrorists and violent extremists including Da’esh, Al-Qaida and their affiliates have exploited instability and conflict to increase their activities and intensify attacks across the continent”, Amina Mohammed said on behalf of Secretary-General António Guterres.

“Their senseless, terror-fuelled violence has killed and wounded thousands and many more continue to suffer from the broader impact of terrorism on their lives and livelihoods”.

With misogyny at the core of many terrorist groups’ ideology, women and girls in particular, are bearing the brunt of insecurity and inequality.

The skyline beyond the northern suburbs of Mogadishu is seen through a bullet hole in the window of a hotel in Somalia.

And over the last two years, some of the most violent affiliates of Da’esh have expanded, increasing their presence in Mali, Burkina Faso and Niger as well as southward into the Gulf of Guinea.

“Terrorist and violent extremist groups aggravate instability and human suffering. And they can plunge a country emerging from war back into the depths of conflict”, reminded the senior UN official.

And as digital tools spread hate and disinformation, terrorists and other criminal groups are exploiting inter-communal tensions and food insecurity triggered by climate change.

In today’s hyper-connected world, Ms. Mohammed remined that the spread of terrorism in Africa is “not a concern for African Member States alone”.

“The challenge belongs to us all. Countering international terrorism requires effective multilateral responses”, she flagged.

From the climate emergency to armed conflict and poverty and inequality to lawless cyberspace, and the uneven recovery from COVID-19, she also pointed out that terrorism is converging with other threats.

For a holistic, comprehensive approach, the deputy UN chief cited the New Agenda for Peace – part of the Our Common Agenda report.

Amidst increasing polarization, she maintained that it proposes ways to address risks and revitalize our collective peace and security system.

Menaka in the northeast of Mali has been experiencing increasing insecurity as a result of attacks by terrorist groups and other armed groups.

Pushing back on terror

“We must address the instability and conflict that can lead to terrorism in the first place, as well as the conditions exploited by terrorists in pursuit of their agendas”.

Noting “complex links between terrorism, patriarchy and gender-based violence”, she said counter-terrorism policies needed to be “strengthened by the meaningful participation and leadership of women and girls”.

She underscored in her third point that “countering terrorism can never be an excuse for violating human rights or international law” as it would “only set us back”.

Fourth, she stressed to importance of regional organisations which can address challenges posed by terrorist and violent extremist groups in the local context.

From economic deprivation to organized crime and governance challenges, “the magnitude of the problem calls for bold investment”, she told ambassadors.

In closing, the Deputy Secretary-General welcomed the planned October 2023 Summit on counterterrorism in Africa as an opportunity to consider ways to strengthen the UN’s efforts across the continent overall.

She expressed confidence that today’s debate would offer insights for the summit, and “help to build peaceful, stable communities and societies across the continent”.

Soldiers from Burkina Faso during a military operation along the border with Mali and Niger.

Chairing the meeting with his country assuming the presidency of the Council for November, Ghanaian President Nana Addo Dankwa Akufo-Addo, attested to the importance of restoring effective State authority and promoting inclusive governance across the continent. He also urged the Council to support AU-led counter-terror operations, including with predictable funding.

African Union (AU) Commission Chair, Moussa Faki Mahamat, drew attention in his briefing, to the daily physical and psychological damage caused by terrorism and reminded that conventional responses and old models are no longer relevant to counter evolving threats on the ground.

And as terrorism extends to new parts of the continent, Benedikta von Seherr-Thoss, Managing Director for Common Security and Defence Policy and Crisis Response with the European Union’s diplomatic wing (European External Action Service) noted the need for security support while underscoring the role of sustainable development for nourishing peace.

Comfort Ero, President and CEO of the International Crisis Group, also briefed the Council, and maintained that technical and military solutions would not end terrorist threats on their own, calling for a new counter-terror toolkit that includes more dialogue with armed groups and can promote local ceasefire arrangements. 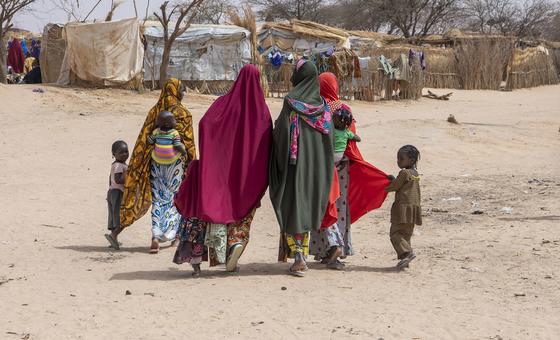