In the Democratic Republic of Congo, at least 27 million people are facing food insecurity, according to the United Nations.

The UN predicts the situation is likely to worsen, due to recent fighting between the M23 rebel group and the army in the East of the country, that has displaced tens of thousands.

The region, which borders Rwanda, lives with a daily threat from dozens of armed groups that jostle for a piece of the region’s rich mineral wealth, which the world mines for electric cars, laptops and mobile phones.

The crisis in DRC is considered the world’s most neglected displacement situation according to a report by the Norwegian Refugee Council (NRC).

The country also experiences high rates of food insecurity, according to the FAO.

The M23 offensive has had a major impact on civilians, dozens have died, including children and more than 170,000 displaced, according to the UN.

The rebels have taken control of several villages, clashing with the government’s army and increasing the already serious humanitarian crisis in the area.

As the fighting continues and more areas are affected, the number of people fleeing rises every day.

Around 500,000 could be considered to be in a vulnerable situation in that part of the country, according to the UN.

Most of those who fled their villages, now live in precarious conditions in churches or schools transformed into shelters.

Their food and water supplies are limited to donations from locals and humanitarian organizations.

Carrying a bag with beans on her head, Kasula Adisi, a 27-year-old mother of two who fled the violence in Rutshuru, says she has no food or water and depends on the kindness of others to obtain something to cook for her children.

“I carry beans in this plate, (on her head) I went to ask for it at a neighbor’s house to give it to the children who have not had any food since yesterday,” she says.

Adisi then sets about lighting a fire to prepare food for her children and other displaced people.

61-year-old Suzanne Neema is a widow and mother of ten children.

Neema says she begs for food to be able to give something to her children, some of whom are sick due to malnutrition.

“I have ten children, four of them have already fallen ill because of the lack of food, they suffer from kwashiorkor (malnutrition caused by lack of protein)” she said “And I feel very bad too (sick)”.

Kwashiorkor is a severe protein malnutrition that causes swelling and skin lesions.

The situation in the country is complex and has lasted for more than 20 years, says Abdoulaye Sawadogo, deputy head of office of the UN Office for the Coordination of Humanitarian Affairs (OCHA) in DRC.

He says several factors influence the humanitarian crisis and food crisis in the country.

After increasing from 2019 to 2020 in most of Africa, Asia and Latin America and the Caribbean, hunger continued to rise in most subregions in 2021, but at a slower pace, says the FAO report.

Compared with 2019, the largest increase was observed in Africa, both in terms of percentage and number of people. 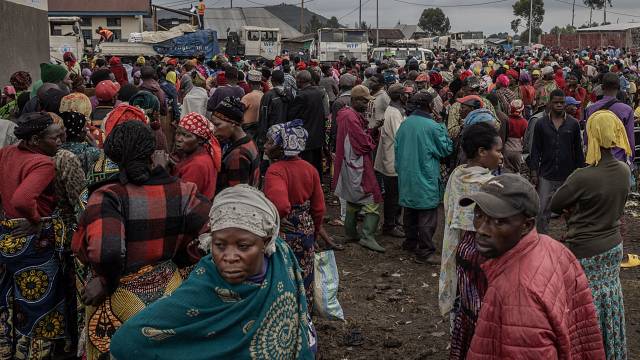