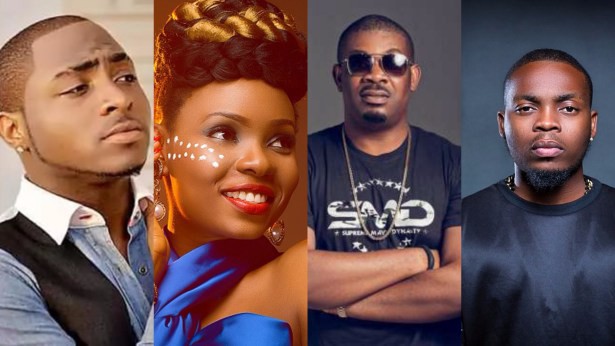 Instagram, has undoubtedly remained one of the most influential social medium where celebrities interact with their fans.

The video and picture sharing platform which is likened to a virtual diary has been used by musicians and other celebrities alike to bring fans closer to them and even reveal some aspect of their private life.

Based on celebrities’ popularity, vibe, influence on fans among others, many Nigerian music stars have been able to win millions of followers on Instagram.

Others are able to win fans to follow them on social media for their giveaways, flamboyant lifestyle, fashion style, controversial statements, hilarious content, among others.

Here is a review of the Top 10 Nigerian artistes who have the largest followers on Instagram.

He became the most followed Nigerian artiste on the social media platform.

The twenty-seven-year-old singer broke into the music scene back in 2012 when he dropped the hit single ‘Dami Duro.’ Since then there has been no holding back for Davido.

This is not the first for the artiste, he was still the first Nigerian artiste to reach 1 million, 2 million, 5 million, 10 million, and 15 million followers on the same social media platform.

Davido who is very active on Instagram keeps his page very interactive and lively especially his stories where he uploads almost all his daily activities.

Yemi Alade also known as Mama Africa is not only known for singing but also for excellent choreography skills.

The music diva since her break in the music industry in 2014 has managed to stay off any social media or real-life drama.

Her Instagram page is mostly filled with dance videos and pictures of her. There’s barely any detail into her private life on her page.

She gained prominence in the industry after her hit, ‘Johnny’ in 2014.

Yemi Alade remains one of the few most successful female artists in Nigeria.

Tiwa Savage is not only a musician but also an actress.

The beautiful song star has remained a dominant female figure in the music industry having remained relevant for close to 10 years.

Years back, the music star had a flare for sharing sultry and gorgeous photos on her Instagram page.

She took down those pictures at some point. Her 125 Instagram posts are mostly about her works and her cute little son, Jam Jam.

Tiwa barely gives anyone details of what she is up to on Instagram, unlike several other celebrities.

The music star should undoubtedly rival Davido for the top spot, however, unlike OBO, Wizkid is not all crazy about the social media frenzy.

Mostly, Wizkid posts about events relating to his craft and kept his private life away from social media generally.

Michael Collins Ajereh aka Don Jazzy is the founder and the CEO of Mavin Records.

He was also co-owner of the defunct Mo’ Hits Records record label with Dbanj.

Being active and interactive on social media is an understatement for Don Jazzy. He basically lives on Instagram and Twitter when he is off work.

The music mogul could also be mistaken for a comedian because of the hilarious videos he shares on Instagram. This has helped catapult him to one of the most followed musicians on Instagram.

Peter Okoye aka Mr. P is one of the twins from the popular defunct P-square group.

Owing to his good-looking physique, good music, and dancing skills, he has remained one of the ladies’ favorite in the music industry.

The singer remains active on social media and also has managed to keep happenings in his personal life private.

Simisola Kosoko simply called Simi and wife to music star, Adekunle Gold has an army of loyal fans behind her back.

Her good music coupled with her angelic voice would ensure her fans’ return to her for more and more content.

Simi alongside her husband, Adekunle Gold are known to be very active on social media as they both share loved-up pictures of one another on their socials from time to time.

However, despite playing her love in the public glare sometimes, she is known to be in control of her socials and only let fans see what she chooses and how she chooses.

Tekno undoubtedly is an embodiment of talent regarding entertainment. He sings as perfect as he dances and how good he is at production.

Surprisingly, Tekno has taken down all posts on his Instagram page, however, his 8.6 million followers have remained loyal to him.

The music star is not one of the many celebrities who are always active on social media.

The son of renowned lawyers and human rights activists Funmi and Femi Falana became more popular on social media after being a lead voice during the nationwide #EndSARS protest in Nigeria.

The singer and rapper is also a professional lawyer by training.

Falz TheBahdGuyis very active on Instagram as he frequently gives fans a hint into happenings in his private life.

Olamide Gbenga Adedeji aka Olamide remains a force to reckon with in the music industry having had his big break in 2010 with Eni Duro.

The Bariga bred musician has remained active in the music space since then.

Despite not being very active on social media and only coming online once in a while, the music star manages to rank among the topmost followed artists on Instagram.

Olamide through his posts barely gives any lead into his private life but is known for always making official announcements about his project and work on his Instagram page.

Most recently, he announced his next studio album, UY Scuti would be released on June 14th, anticipate.

Several notable music stars who are supposed to rank among the top 10 most followed music stars are nowhere near the list.

Some of them are Burna Boy, 2baba, DBanj, Banky Patoranking, Flavour among others.