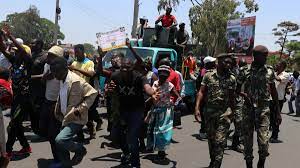 If a family divides itself into groups which fight each other, that family will fall apart. – Mark 3:25

A Song of degrees of David. Behold, how good and how pleasant it is for brethren to dwell together in unity! – Psalm 133:1

After 58 years of independent rule and 56 republican status, Malawi is in full-blown war mode. In the past two months brewing and festering in mainstream, social, and fake media portals, Malawians are at each other in five major and other minor wars that threaten to pull the fabric of peace and calm, law and order, and the warm hear t of Africa the country has been known to be. All that unity, loyalty, discipline, and obedience is firmly and resolutely in the eternal dustbin of the past.

Regrettably, here is the spoiler alert: Malawians, you are all, every one of you, no matter how noble the undertaking, fighting the wrong wars. The enemy is not within the country; the enemy larks writ large and is known as the European Union. The EU, through a deceptive “we want to help you poorer countries in the ACP,” is tragically in colonial spears, guns, and daggers drawn mode and ready to take over, colonize 79 countries through the new OACP-EU Post-Cotonou Agreement.

In the past two to three months high-level and low-level Malawians have engaged in battles, calling for resignations, imprisonments, demonstrations, and kidnappings. There are many, however for space, five are the following:

Malawi at age 58 years, is messing up big time. In an era of wide access to speedy information, it is very apparent that of all the evil vile things we appear to have learned from the Kamuzu Banda era, we failed to grasp two good and important ones. These two values embraced by Kamuzu (Malawi State President for Life, 1964-1994) were:

Kamuzu refrained from joining his colleagues in championing the freedom of regional nations around Malawi. He decided instead to concentrate on spearheading national development through uniting the country by calling for loyalty, discipline and obedience. These are powerful and useful even in a democracy. Another battle was against three enemies that appear to have crept through the backdoor, namely poverty, ignorance, and disease.

Kamuzu’s famous repeats were hard work in the fields; university in Zomba, lakeshore road, and capital in Lilongwe; contact and dialogue; unity, loyalty, obedience, and discipline upon which the MCP is built; no backbiting (no snitching on each other); no tribalism, and many others.

Kamuzu usually started his repeats by his signature phrase, “When I was in Gweru, I had three dreams (university in Zomba, lakeshore road, and capital in Lilongwe). As Malawians endured through this liturgy of repeats and selective battles, Malawi had no riots, demonstrations, and no inside or outside wars.

In democratic Malawi, we have entered into internal strife and aware. However, Malawians must be aware of the bigger war that is looming larger from faraway European countries. Malawians will need to first unite among themselves and resolve to fight this enemy called the European Union. The EU must be stopped from walking into our borders and taking over by among other means muzzling the Malawi voice in international organizations such as the United Nations and all its agencies

The EU plans to use the OACP-EU post-Cotonou Agreement, which has a treaty component that binds African, Caribbean and Pacific countries (79 in number) to vote along with the 27-member EU position. In exchange, the ACPs get aid. Thus the African, Caribbean, and Pacific nations are given money for the EU to grab from the ACPS their votes at international foras. Voting as Europeans vote, the ACPs seize to exist.

This should be repugnant to every Malawian, and every Malawian leader should aspire to engage with the nation on its resolve to protect Malawi’s integrity and sovereignty.

Another vile strategy of the EU is to sexualize children in the ACPs through distribution of offensive and inappropriate books on sex and abortion, including other doctrines in this genre. The EU is doing these vile deceptive things by slapping the “human rights label on anything and everything.

This is the war that every Malawian and citizens on other ACP countries, should fight to stop the EU from re-colonizing ACPS, muzzling them and thrusting them into deeper poverty.

The battle against the EU recolonizing and muzzling Malawi voice, is worth Malawians campaigning against and marching on the streets toward the EU offices, protected by the Police.

It is time to fight. The enemy of Malawians is not other Malawians, the enemy is the European Union.