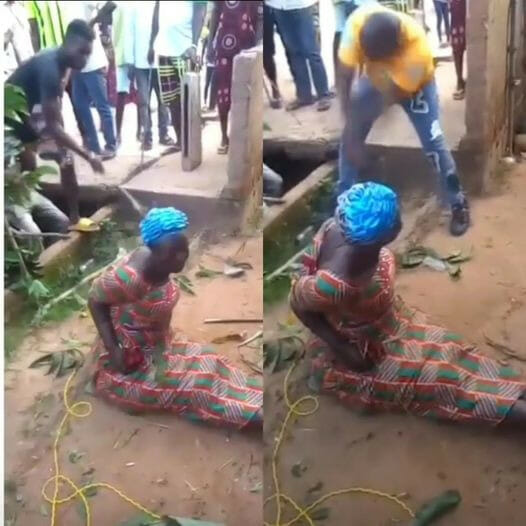 The Advocacy for Alleged Witches (AfAW) deplores the torture and dehumanizing treatment of Mrs. Amarachi Okechi from Umueghu in Amaegbuato autonomous community Nkpa Bende Local Government, Abia state. A video that is circulating on social media shows some youths flogging this woman while some people looked on. Family sources told AfAW that some persons accused Mrs. Okechi of witchcraft after a young girl took ill and the illness “defied” treatment. They claimed that Mrs. Okechi magically caused the ailment. Youths in the community accused her after consulting a local diviner who certified that Mrs. Okechi was behind the sickness. Mr. Okechukwu Chidirim led the youths who consulted the diviner.

A relative told AfAW that on Tuesday, August 23, some youths abducted Mrs. Okechi, tied her hands and legs, and flogged her at a public square. A part of the video shows where some blood was gushing from her head. They forced her to sleep outside until the following day. On Wednesday, August 24, the youths flogged Mrs. Okechi again; they hit her with sticks and stones. She sustained injuries, and had bruises on her head, hands and back. According to local sources, some family members tried to intervene, but the youths attacked and beat them up. The youths asked Mrs. Okechi to heal the girl or she would suffer a worse fate. They compelled the family of Mrs. Okechi to pay them the sum of 50,000 Naira. They claimed it was the money that they paid to consult a diviner. Messers Chijioke Onyele and Okechukwu Chidirim collected the money on behalf of the youths from the community.

AfAW is in touch with family members on how to ensure the safety of the accused. The life of Mrs. Okechi is in danger. She could be killed if the sick child eventually dies. There is an ongoing consultation on how to take her to a safe location. Mrs Okechi also needs some medical examination.

However, AfAW has been informed some youths are threatening to burn down Mrs Okechi’s house if anyone takes her out of the community. AfAW urges the traditional ruler and president general of the community to call the youths in the community to order, and get to end this show of shame. Community leaders should work to ensure that Mrs. Okechi suffers no further harm or abuse. The torture and maltreatment of Mrs. Okechi are clear cases of jungle justice and trial by ordeal. They are criminal acts. AfAW calls on the divisional police officer in Uzuakoli and the Abia state police command to ensure that the perpetrators are brought to justice. State ministries for justice, women affairs and social welfare should synergize and help bring to an end witchcraft accusations and the barbaric treatment of alleged witches in the state.