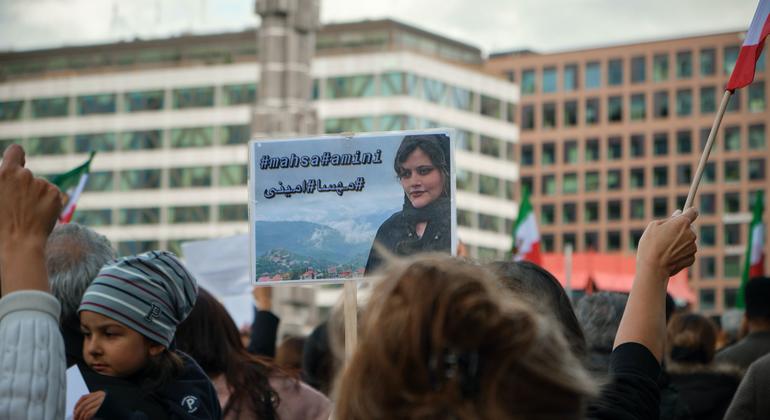 OHCHR said it was very concerned about the continued violent response to the protests, as well as communications restrictions affecting phones, the internet and social media, Spokesperson Ravina Shamdasani told journalists in Geneva.

Ms. Amini, 22, was arrested by Iran’s “morality police” in the capital, Tehran, on 13 September, for allegedly not wearing a hijab in full compliance with mandatory requirements.

She fell into a coma shortly after collapsing at a detention centre and died three days later from a heart attack, according to the authorities.

Ms. Shamdasani said the Iranian Government had so far failed to launch an “adequate investigation” into the circumstances surrounding Ms. Amini’s death.

Since her death, thousands have joined anti-government demonstrations throughout the country.

Security forces have responded at times with live ammunition, and many people have been killed, injured and detained in the protests.

“Due in part to restrictions on telecommunications, it is difficult to establish the precise number of casualties and arrests,” said Ms. Shamdasani.

On Saturday, State media put the number killed at 41, she added. However, non-governmental organizations monitoring the situation have reported a higher number of deaths, including of women and children, and hundreds injured across at least 11 provinces.

“We are extremely concerned by comments by some leaders vilifying protesters, and by the apparent unnecessary and disproportionate use of force against protesters,” said Ms. Shamdasani.

“Firearms must never be used simply to disperse an assembly. In the context of assemblies, they should only be used in cases of an imminent threat to life or of serious injury.”

Meanwhile, reports indicate that hundreds of people have also been arrested, including human rights defenders, lawyers, civil society activists, and at least 18 journalists. The Government has not announced the overall number of arrests.

Ms. Shamdasani reported that in the province of Gilan alone, the police chief said 739 people, including 60 women, had been detained during three days of protests.

OHCHR called on the authorities to ensure the rights to due process and to release all who have been arbitrarily detained.

“We are concerned that the disruption to communications services has serious effects on people’s ability to exchange information, to carry out economic activities and to access public services,” she continued.

“This undermines numerous human rights, notably the right to freedom of expression. We call on the authorities to fully restore Internet access.”

OHCHR also expressed concern over “the persistent impunity with respect to human rights violations in Iran”, including the recurring deaths of protesters due to the alleged use of lethal force by security forces in November 2019, July 2021, and May of this year.

“Our Office reiterates our call upon the Iranian authorities to fully respect the rights to freedom of opinion, expression, peaceful assembly and association, as a State party to the International Covenant on Civil and Political Rights,” said Ms. Shamdasani.