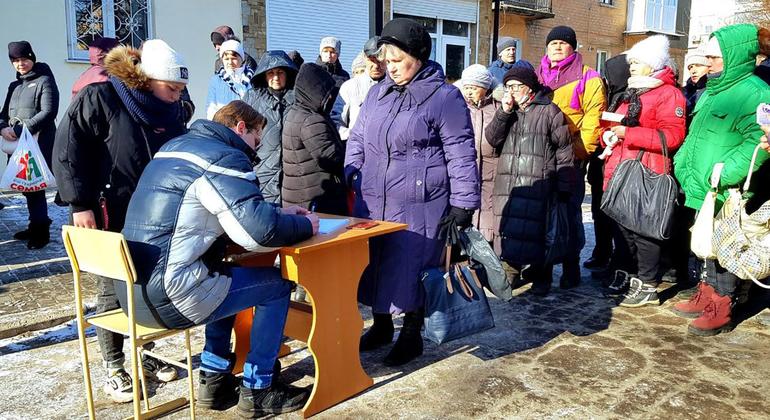 “Hostilities continue to kill and injure civilians as well as destroy and damage civilian infrastructure”, said Head of HRMMU, Matilda Bogner, indicating that hostilities “not only endanger the lives of civilians, but also leave them living in degrading conditions and undermine their rights to health, education, housing, food and water”.

Since the Russian invasion of 24 February, the mission has recorded 5,996 civilian deaths, including 382 children, together with 8,848 injured, noting that the actual figures are much higher, as complete information from conflict zones cannot be obtained.

According to HRMMU, enforced disappearances and arbitrary detention were widespread in territory controlled by Russian armed forces or affiliated armed groups, as well as cases of torture and ill-treatment of civilian detainees.

“The prohibition of torture and arbitrary deprivation of life is absolute and applies in conflict and non-conflict settings to all persons,” said Ms. Bogner. “Perpetrators must be held accountable, and victims and their relatives must enjoy their rights to remedy and truth”.

The report also found that Ukrainian prisoners of war (POWs) were subjected to torture or cruel and degrading treatment.

“Such mistreatment…appears to be systematic, not only upon their capture, but also following their transfer to places of internment both in territory of Ukraine occupied by the Russian Federation and in the Russian Federation itself,” said the HRMMU chief, calling it “a grave violation of international humanitarian law” that Russia must address.

Meanwhile, some Russian POWs were tortured and ill-treated by Ukrainian armed forces as well.

“There must be timely and effective investigations into all allegations of violations of international humanitarian law and human rights law, including torture, ill-treatment, arbitrary detention and sexual violence,” she continued, adding that “regardless of their affiliation,” perpetrators need to be “duly prosecuted”.

Hostilities have severely impacted the rights of persons with disabilities and the elderly, the majority of whom are women, leaving them without healthcare, adequate housing, heating, water and electricity.

Furthermore, some journalists, media workers, and bloggers have been killed in areas controlled by the Russian military or affiliated armed groups.

The report emphasized that freedom of expression, including access to media, has been restricted in occupied areas.

“We are concerned that the shrinking civic space and highly restrictive environment in areas occupied by the Russian Federation deter people from reporting the human rights violations they have experienced or witnessed,” said Ms. Bogner said.

A twelve-year-old girl stands in front of her school which was destroyed in an air strike during the conflict in Kharkiv, Ukraine.

The report made recommendations to both Governments and the international community and called for their swift implementation to improve human rights in the country, better protect civilians, and strengthen accountability.

Ms. Bogner assured that HRMMU would “continue to document and report the facts on the ground and give a voice to victims”.

“We consider this to be an essential part of seeking to prevent further violations and hold those responsible accountable for the violations already committed”.