Violent clashes broke out Saturday between Tunisian security forces and hundreds of young protesters who took to the streets of central Tunis to demonstrate against a spike in police brutality in Tunisia’s working-class neighbourhoods. In footage from the capital, protesters were seen throwing sticks, chairs and water bottles at security forces who in turn fired tear gas and roughly detained several people. Saturday’s rally followed three consecutive nights of clashes after a young man was killed “in suspicious circumstances” in the Sidi Hassine Sijoumi area on the outskirts of Tunis, according to the Tunisian League for the Defense of Human Rights (LTDH). The unrest was also in part triggered by an assault on Thursday, in which a minor was stripped naked and severely beaten by police forces in the same neighbourhood – the resulting video being widely circulated on social media. Following widespread public outrage, and after having initially argued that the beaten young man in the video was drunk, the Ministry of the Interior has admitted law enforcement officers were responsible for the assault and ensured they were suspended from their duties. In a statement, the LTDH denounced the violence suffered by citizens during clashes with the police “in order to silence the voices of protest”, by blaming Prime Minister Hichem Mechichi – who is also the interim interior minister. 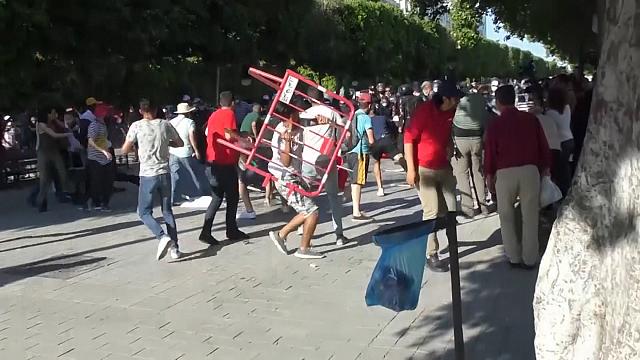