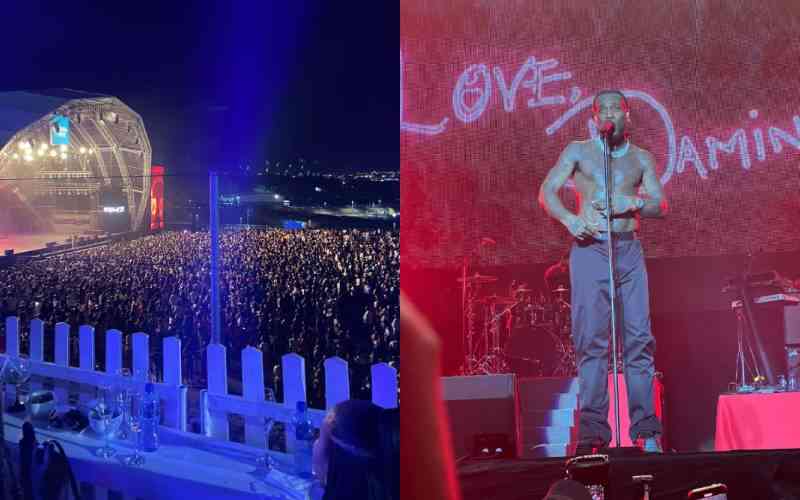 Headlining the concert that featured artistes from across the continent, the Love Damini singer proved he was the real ‘African Giant’ as he staged a world-class performance before an elated crowd.

The event also featured other arenas within, like the Channel O Drip stage with artistes like Kamo Mphela and DBN Gogo.

The influencers were in the country courtesy of South African Tourism, together with guests from nine other countries, including Botswana, Estwatini, Lesotho, Malawi, Mozambique, Namibia, Tanzania, Uganda, Zambia and Zimbabwe.

Speaking to The Standard at the event, the content creators expressed excitement at the opportunity, saying that as Kenyans they had gotten a beautiful reception.

“We are looking forward to seeing amazing performances from different artistes from all over the world. We have Babyface, we have Burna Boy and also just eating and drinking to our fill,” said Azziad.

Cindy K also told The Standard about what they expect from the festival.

“We are expecting entertainment, the tip-top including Oluwaburna and other deejays. This is going to be such an amazing event. Shout out to South African Tourism and shout out to SA for inviting us here. We love you,” she said.

Alongside the content creators were the Kenyan winners of the Sho Madjozi #XibelaniMoves challenge on Tiktok, like Nicole Chepkorir and Mary Erica, who also participated in the challenge.

They met other winners from Namibia, where a dance battle determined the ultimate winner, who was Saara Ngolo from Namibia. She will be flown back to South Africa to participate in Sho Madjozi’s next video, as being featured in it was the grand prize.

“The dancing competition was exciting. I was anxious at first but I rocked it. It was my first time dancing the Tsonga dance known as Xibelani but we did what needed to be done. We had fun on the stage and that is what matters,” said Chepkorir, who emerged second.

A South African events coordinator, Ndumiso Buthelezi, also known as 2Lee Stark, talked about the significance of such events in the country.

“In Johannesburg usually we have a lot of festivals like this. Another one is happening next month. It is a lot of Hip Hop, a lot of music, a lot of fun, a lot of vibes, the energy is always high. I mean, it is the richest square mile in Africa, so you’re always going to see a lot of stuff going down. It is a really dope vibe,” he said.

“We would also love to see Kenya as well. We would get to have a fun exchange in terms of what goes down there as well, but if y’all coming to South Africa, definitely Joburg is the place to be. The club scene is hot and festivals are there as well. It is a vibe.”

You can follow posts regarding the trending event on #DSTVDeliciousFestival2022 and #LiveSouthAfrica.