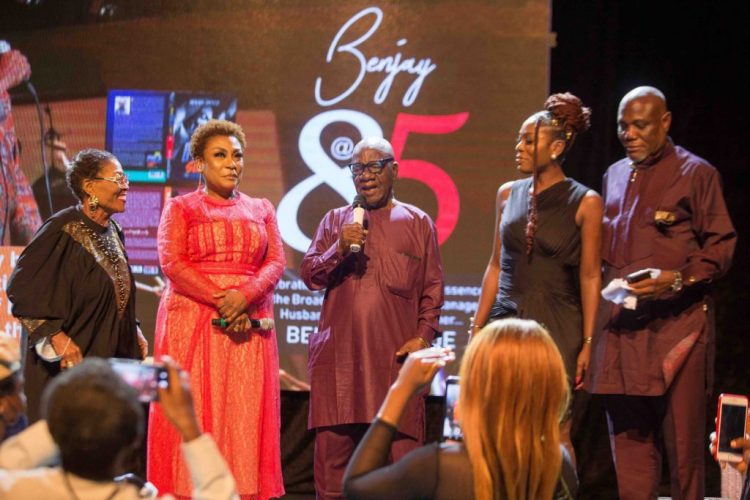 Mr Benson Idonije flanked by his daughter, wife, in-law and granddaughter ( All photos by Efunla Ayodele) –> 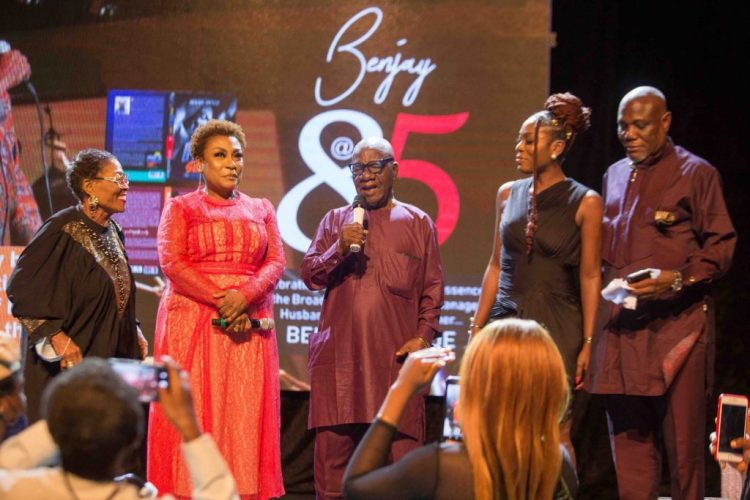 Mr Benson Idonije flanked by his daughter, wife, in-law and granddaughter ( All photos by Efunla Ayodele)

Funmilayo Ransome Kuti, mother of Afrobeat legend, Fela Anikulapo Kuti, may have left footprints in the sands of time as an activist, but the imprints she left on her son’s style of music will indeed be etched on the minds of music buffs across the globe for a long time.

Benson Idonije, quintessential music critic, broadcaster and Fela’s first band manager made this disclosure on Sunday when the arts community converged on Terra Kulture in Victoria Island, Lagos to celebrate his 85th birthday. The event was organised by Committee for Relevant Arts, CORA as part of activities marking its 20th anniversary celebration.

Idonije, the grandfather of Grammy award-winning artiste, Burna Boy displayed a rare and an insider knowledge of Fela’s trajectory as a musician when, reading from his book, ‘Dis Fela Sef,’ he narrated Fela’s growth as a bohemian artiste but also his life and times, saying the Afrobeat king was initially a jazz musician and trumpeter until his mother asked him in a meeting they both had with her to jettison jazz for highlife because of its cultural relevance and commercial viability Her reason: he had no future in jazz.

“As providence would have it, a meeting Fela and I had with his mother, Mrs Funmilayo Ransome Kuti in November 1964 was to alter the course of events and the shape of his music. Mrs Ransome Kuti invited Fela and I to Abeokuta, her home town in Western Nigeria.

“As soon as we arrived, she summoned us to the living room. ‘Fela, Manger,’ she called out. This music you are playing is good, and I know that you enjoyed it greatly. But you want to consider its cultural relevance and commercial viability. Fela, I want you to go back to the high life you started in London. That’s where your future is.

“Fela and I looked at each other in dismay, our expressions indicating that she did not understand what we were doing. But on reflection, the message had a lot of weight. It made a lot of sense. We both were silent for a minute. We had nothing to say,” Idonije read. That indeed marked a turning point in Fela’s music career. Fela not only complied with the motherly instruction, but spiced up his high life with jazz, taking it a notch higher.

Idonije also used the opportunity to lay to rest the much-touted controversy stirred by the belief in some quarters that Tony Allen and Fela co-created Afrobeat. According to the highly respected music critic Fela alone was the creator of Afrobeat, adding that when Allen joined Fela’s band he wasn’t conversant with the drumming style of Afrobeat. He also said on several occasions, Fela took it upon himself to tell Allen the kind of beat he wanted.

“Tony Allen, who later took over the mantle of band leadership from Isaac Olasugba was an exciting drummer who had ear for good music. He responded promptly to Fela’s influence and tutelage. Having played highlife music with many bands, he did not find it difficult adapting to the jazz-oriented rhythmic patterns that Fela introduced to the band – rhythms that eventually evolved into the unquenchable fire strokes that characterized Afrobeat music,” Idonije averred.

Idonije also spoke about how he heard about Fela for the first time through his mother. “The first time I heard about Fela was in 1961 through his mother. She came to Broadcasting House, Ikoyi, Lagos, where I worked then in the Gramophone Library. She brought with her two single plays of Fela’s newly recorded music and was directed to me as the man most likely to appreciate that kind of music,” he noted.

But his first encounter with Fela himself happened when his NBC Jazz Club, a programme he presented from 10: 15 to 11 pm at the National broadcasting Corporation, NBC, caught Fela’s attention and he wanted to meet the voice behind the microphone.

“He drove down to Broadcasting House one Thursday night when the programme was on the air. He was directed to the live studio, where he met me and introduced himself as Fela Ransome Kuti. He brandished a white label jazz album which he obviously wanted to me to play on the programme. I played all the tracks with a chat that had him discussing the music and explaining the circumstances in which they were recorded,” Idonije recalled.

It was an afternoon of memories, music and dance. Artistes such as Segun Adefila and his Crown Troupe of Africa; Afrobeat artiste, Dede Mabiaku; high life musician and academic Biodun Batik; and Jojo thrilled the audience with their spectacular performances.

The celebrant, who betrayed an encyclopedia knowledge of Fela’s music and the spirit of the times was there with his wife, Samuel Ogulu (Burna Boy’s dad), Bosede Ogulu, Burna’s Boy’s mother and manager, his sister, Ronami. Idonje who was palpably pleased with the celebration described it as déjà vu, recalling how he was also celebrated on his 80th birthday

However, Toyin Akinosho, writer, journalist, arts critic and Secretary General, Committee for Relevant Arts set the ball rolling by giving a brief speech on behalf of Cora. Akinosho who described Idonije as a close and beloved associate of CORA, went down memory lane detailing not just the role Idonije played in defining the music culture in Lagos as a broadcaster and deejay but also how he brought music to the doorsteps of Nigerians when he was at Broadcasting House, Ikoyi, Lagos.

“Benson Idonije, who was a fixture in the high life movement in the 60s, who was part of the pioneers of the disco gigs in the early 70s was also on the ground floor of the move to take Nigeria out of one single radio station. Ladies and gentlemen, up till 1976 all of Nigeria listened to only one radio station – Radio Nigeria One,” he said.

“You will hear enough this afternoon about how Uncle Ben was the first manager of Fela Kuti and how he turned about 30 years later to be grandpa of the Grammy award-winning Burna Boy who has taken the title of the African Giant,” he said

Another important feature of the celebration was when members of the celebrant’s family including Burna Boy’s mother, his sisters Ronami and Nissi Ogulu as well as Idonije’s son, Tolu Benson Idonije took turns to read excerpts from Dis Fela Sef, a book written by Idonije to the admiration of the guests. The celebrant spiced up the event by taking some group photographs with his family and members of the music tribe. And Bosede express her appreciation to CORA for organizing the event and to the guests for gracing the occasion.

However, the highlight of the occasion was when Grammy award winning artiste, Burna Boy mounted the stage with his band to perform Fela’s classic, ‘Lady,’ a scintillating performance he put up to celebrant his grandfather, who, no doubt had an immense influence on the growth and success of his music career.