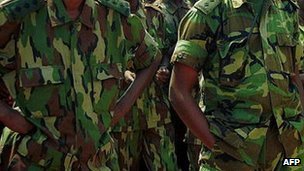 Rwanda is holding more than 280 troops accused of desertion on an island in Lake Kivu, the army has revealed.

An alleged deserter being held on the island had told the BBC the soldiers were transferred there a year ago from a military prison to prevent a planned visit by the Red Cross.

Denying the allegations, Gen Nzabamwita said the BBC was welcome to visit the island.

The Rwandan army is mainly run by former commanders of the Tutsi Rwandan Patriotic Front (RPF) rebel group which came to power after the 1994 genocide.

Correspondents say the RPF always expected loyalty and discipline from its fighters.

“We were first detained in the Mulindi military prison, we were transferred here to Iwawa Island [on Lake Kivu] in March 2012, when they were hiding us from the Red Cross officials,” the alleged deserter told the BBC’s Great Lakes Service.

He said many of them had been held for up to four years without trial and without visitors.

But Gen Nzabamwita told the BBC they were “not being detained, they are being re-educated”.

“Those are our troops who deserted their jobs. We take these people there so that they can behave themselves again,” he said.

“And I think this is something that is beneficial both for themselves and for Rwandan society.”