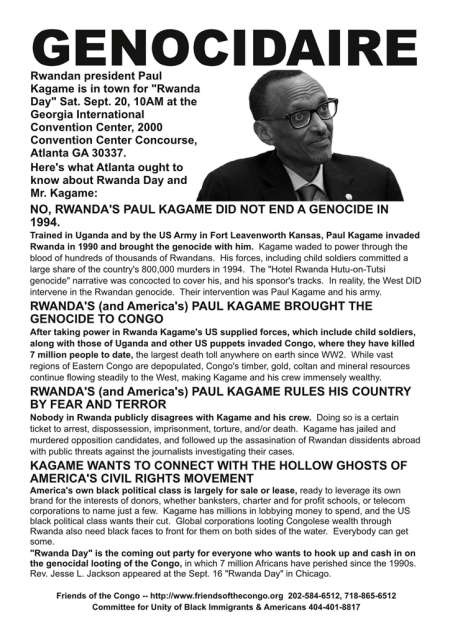 To the City of Atlanta, former Mayor Andrew Young and Bernice King:

Individuals and organizations listed below have come to know that the President of Rwanda, Paul Kagame, is organizing what he calls Rwanda Day, a meeting with the Rwandan Diaspora and the American public in the city of Atlanta.

We, the Congolese and Rwandan Diaspora, indigenous of the Congo and Rwanda, together with friends of these two countries, denounce and strongly condemn the fact that the president of Rwanda is allowed to organize such a meeting on American soil with the blessing of the authorities of the City of Atlanta.

Our condemnation is based on the fact that the people of the African Great Lakes regions have suffered from the abuses committed by Paul Kagame and his government for 24 years now.

We would like to bring the following basic facts about Paul Kagame to the attention of all Americans who are committed to peace and social justice:

All statements mentioned above have been duly documented by various U.N. reports, documented news reports including video footage, and legal judgments: 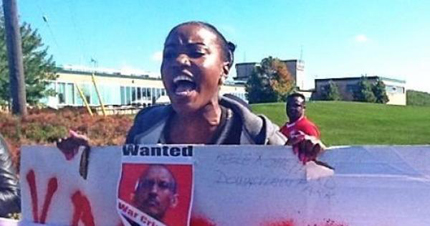 The United States, which takes pride in its democratic history, and the City of Atlanta, which played such a proud role in the American Civil Rights Movement led by Dr. Martin Luther King, cannot want to appear to the world as supporters of dictatorship and mass murder, but allowing Paul Kagame to organize “Rwanda Day” in Atlanta tells the world that they are.

The violation of human rights is no more acceptable in Africa than in the United States or anywhere else in the world. We like to believe that human beings, wherever they are, are entitled to justice and that it is a denial of justice to host an event created to let a regime with bloody hands promote itself, while the millions it killed remain compelled to silence in death because we do not have the courage to speak for them and say enough is enough.

A message from a Congolese citizen, Philippe Lomboto Liondjo: “Please do not insult Martin Luther King’s memory and the spirit of the honorable struggle for Civil Rights by allowing a killer such as Gen. Kagame to organize his Rwanda Day in Atlanta.”