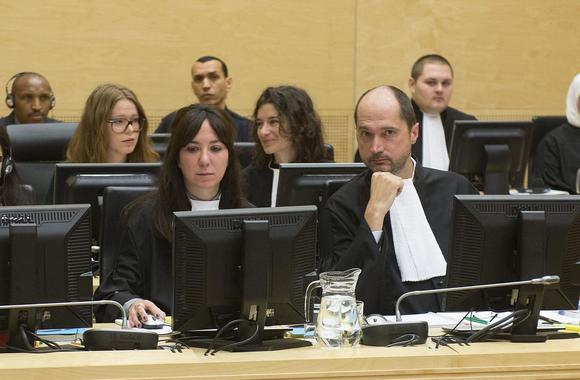 Defense Counsel Marc Desalliers (R) and Caroline Buteau look on during the case against Congolese militia leader Bosco Ntaganda at the International Criminal Court in The Hague, February 10, 2014.

(Reuters) – A Congolese militia leader widely known as “the Terminator” led fighters, including child soldiers, in a campaign of ethnically-motivated rape and murder, the International Criminal Court was told on Monday.

Prosecutors told judges that Bosco Ntaganda had committed the crimes while leading fighters of Hema ethnicity to drive ethnic Lendus out of the mineral-rich Ituri region in the northeast of the Democratic Republic of Congo over a decade ago.

The allegations against Ntaganda were made at the opening of hearings seen as a test for the global legal institution after a string of troubled cases. Ntaganda could face life imprisonment if convicted and has yet to enter a plea.

“He played a key role in planning assaults against the civilian population in order to gain territory,” Chief Prosecutor Fatou Bensouda told judges who will decide if there is enough evidence for Ntaganda to stand trial.

Ntaganda, who commanded the United of Congolese Patriots (UPC) militia, had “failed to prevent or punish crimes by troops under his effective command or control,” she said.

But defense lawyers responded that the Ituri conflict had not had the ethnic character prosecutors were ascribing to it.

“The UPC was not a Hema militia – several commanders belonged to other ethnic groups, including those who took part in the events that form the basis for the charges today,” said defense lawyer Marc Desalliers.

“The person before you is not Hema, and nor is he from the Ituri region. He grew up in the North Kivu province, he belongs to the Tutsi ethnic group,” Desalliers said.

Ntaganda is accused of crimes against humanity and war crimes including murder and rape, all allegedly committed during a 2002-03 conflict in the east of the country.

“Victims were killed by bullets, by arrows, by nail-studded sticks,” said Dmytro Surprun, a lawyer representing victims of the alleged crimes. “Most of them were mutilated, some were decapitated, and their head borne as a trophy.”

Ntaganda’s lawyers said the militia was defending local civilian populations at a time when Congolese authorities were “absent from the region and even contributing” to the violence.

“Taking up weapons to defend people is not a crime, it is a fundamental right,” Ntaganda’s lawyer said.

Ntaganda, a tall, slight man with a pencil-line moustache, rose briefly at the start of the hearing, speaking in his native Kinyarwanda tongue to confirm his identity.

He handed himself in to the U.S. embassy in the Rwandan capital Kigali last March after a 15-year career as a commander in a series of rebellions in Ituri province.

Shortly after his arrival in The Hague, prosecutors asked judges for more time to rebuild a case which had been dormant for five years while Ntaganda was on the run.

The session will be a test of prosecutor Bensouda’s promise last year that cases will be “trial ready” by the time they come to court, in contrast to earlier cases that collapsed when judges ruled evidence was not strong enough.

The court, 11 years old this year, has handed down just one conviction, jailing another Congolese warlord, Thomas Lubanga, for 14 years in 2012 for using child soldiers.

“The court is struggling, and the prosecutor, with her new strategy, has been trying to turn something around,” said Bill Schabas, professor of international law at England’s Middlesex University.

Judges are due to decide over the next few weeks whether to suspend their most high profile current case – against Kenya’s president on charges of orchestrating violence following 2007 elections – after prosecutors said several witnesses had withdrawn. Uhuru Kenyatta denies the charges.

Two other prominent figures facing charges – Sudan’s President Omar Hassan al-Bashir and Saif al-Islam Gaddafi, son of the ousted Libyan leader – remain beyond the court’s reach because their countries refuse to surrender them.

Wars in Congo have killed about 5 million people in the last 15 years, and many eastern areas are still afflicted by violence from a number of rebel groups despite a decade-old U.N. peacekeeping mission.