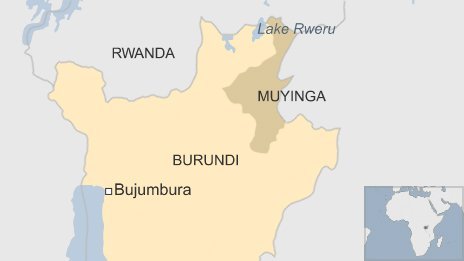 Burundi has set up an investigation after a number of dead bodies wrapped in plastic were found floating in a lake on its border with Rwanda.

Fishermen say there are reports of dozens of unidentified bodies being spotted in recent weeks in Lake Rweru.

It is not clear how they died. The regional authorities say their investigations indicate the victims were not from Burundi.

But Rwanda police say no-one has been reported missing on the Rwandan side.

”The victims are not Burundian citizens because the bodies are coming from Akagera River flowing from Rwanda,” Burundian official, Jean Berchmans Mpabansi, told the BBC.

The latest bodies – five wrapped within two plastic bags – were discovered on Sunday and Monday.

Villagers in Giteranyi district, which borders the lake, say the bodies first began appearing in July – with some saying up to 40 have been spotted.

The BBC’s Prime Ndikumagenge in Burundi says most of the bodies have been wrapped in plastic, but one fisherman said that not all of them have been – giving the example of a naked woman who was found.

The bodies are often discovered in an advanced stage of decomposition, prompting health fears as villagers in the semi-arid province of Muyingai depend on the lake for their water, he says.